Chart: Housing Affordability Set to Fall Off a Cliff

The National Association of Realtors will always be the first ones to tell you that housing is either highly affordable, still affordable (!), or that buying a home remains a great move even if housing affordability is low.

After all, they represent real estate agents, or rather, Realtors®, whose livelihood depends on selling homes, lots of homes.

In other words, they gush optimism, regardless of which way the market is headed.

But they threw a chart up on one of their blogs last week that certainly didn’t do them any favors, even though they tried to paint it in a positive light.

This Is the Affordability Chart Before Mortgage Rates Surged 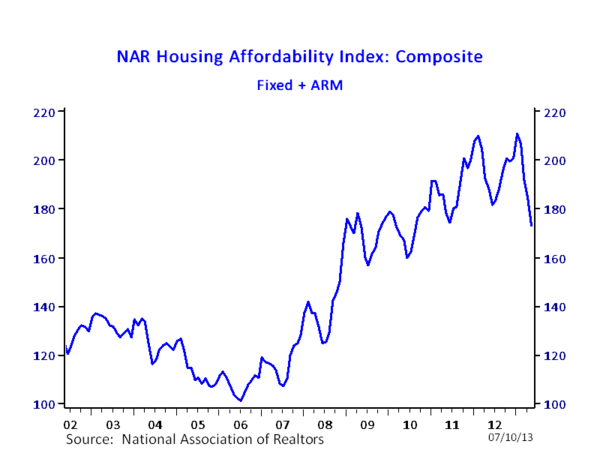 If you look at the chart above, you’ll see the NAR’s measure of housing affordability, which takes into account average mortgage rates and median home prices, assuming the buyer puts down 20% and has a 25% front-end debt-to-income ratio.

As you can see, housing affordability took a major dive in May as home prices reached their highest point since July 2008.

While that’s all good and well for existing homeowners, it means those looking for an opportunity to purchase a home are running out of time, assuming they want to buy for the investment aspect.

The scariest part of this chart, however, is that it relied on the FHFA’s mortgage rate data from May.

During the month of May, the FHFA said mortgage rates actually fell 0.15% from April. Unfortunately, most of us know that mortgage rates are nowhere close to May levels anymore.

And we all know they didn’t drop in June, not by a long shot.

Put simply, this chart is going to look a lot worse when NAR releases their next update on housing affordability.

Of course, they’ll likely come up with a way to make it look less detrimental, perhaps by comparing monthly mortgage payments on a small loan amount. Oh wait, they did that already.

I’m not trying to be overly pessimistic here – mortgage rates are in fact still historically low, as I’ve pointed out several times lately. And home prices aren’t back to their peak levels.

But we aren’t as far off from that crazy time anymore, and who’s to say we should return to those prices anytime soon.

Things didn’t exactly pan out very well back then. And the economy doesn’t exactly look stellar enough to support those boom times at the moment.

Below is an updated chart released on September 6th, 2013. As you can see, affordability dropped to about a five-year low, and the Realtors expect it to sink next month as well: 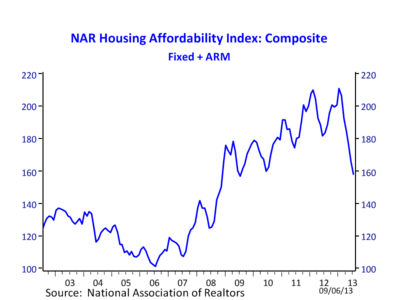 There’s still some room before we get back to those really dark years in 2006 and 2007, but we appear to be heading in that same direction for now…

1 thought on “Chart: Housing Affordability Set to Fall Off a Cliff”

previousChart: Look How Many Homeowners Could Benefit From HARP 3.0
nextFannie Economist: Rising Mortgage Rates Should Slow Purchases, Not Lower Prices