Well it’s mid-2015, and even though the housing market appears to be on fire, 63% of properties actually sold for below list price, this according to the May 2015 Realtors Confidence Index Survey.

This may seem rather surprising, given how hot real estate has been over the past few years.

Ask anyone who has purchased a home (or attempted to) and they’ll probably tell you they got into a bidding war, or were forced to include a cover letter with their offer.

Despite that common tale, most properties don’t actually sell above list. In fact, nearly two-thirds do not.

However, this number has trended down lately. A year ago, around 70% of properties sold at a discount. So clearly properties are selling more easily at higher prices.

The Realtors said properties that remain on the market for a longer period of time are more likely to sell at a discount.

Some 84% of properties that sold between 2012 and May 2015 after 12 months were sold at a discount, per the Realtors’ monthly survey.

Meanwhile, less than half of the properties that sold within a month went for below list price. And nearly a quarter (24%) sold for a premium.

Properties that sold after 12 months only sold at a premium a measly six percent of the time.

In other words, price your home right the first time to avoid a price cut and losing money on the sale. Price it really right and you might sell for a premium.

The Longer They Sit, the Harder They Fall 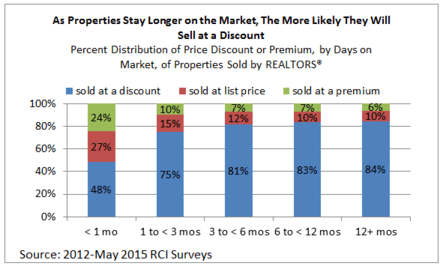 As you can see from the chart above, the longer a listing stagnates, the lower the chance of it selling for list price or at a premium.

Surprisingly, 48% of properties listed for less than a month still went for below their asking price. So there’s always room to negotiate, even if the property was just listed.

And don’t worry about offending anyone – if you don’t offend them with your offer you offered too much, that according to a wise man… 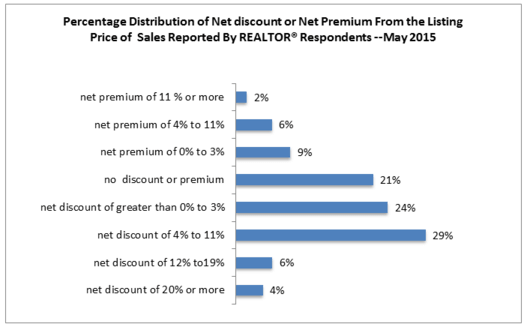 A discount between 0-3% was the second most common outcome, followed by no discount or premium.

Very few properties sold at 20% or more off, and even fewer sold for 11% or more than list.

So it’s important to have realistic expectations when it comes time to sell your home.

In short, you should expect a price cut, and thus list it accordingly. Don’t list it at your absolute bottom dollar price if you know you’ll have trouble accepting a lower offer.

And don’t forget the many closing costs associated with a home sale, along with the hefty commissions that must be paid out to real estate agents involved with the transaction.

If you’re looking to sell for more, consider the fact that staging a property could help it sell for one to five percent more, this according to the Realtors.

Zestimates Can Help with Pricing

In a related article, the Zillow Research team threw out some pointers to help home sellers list their properties at the right price.

They said despite an improving housing market, it’s wise not to “overheat your listing price.”

Zillow found that properties priced more than 12% above their Zestimate are nearly half as likely to sell within 60 days.

And apparently the “sweet spot,” where homes sell the fastest, is between the Zestimate and six percent above it.

The company also discovered that smaller homes sell the fastest (those under 1,100 square feet) and that the optimal number of photos per listing is 16 to 21.

Your home may take longer to sell if you don’t provide enough photos. And as we know, that could result in a price cut. So take good photos and plenty of them.

Read more: Should I continue renting or buy a home instead?