Just prior to the mortgage crisis, stated income loans ran rampant, and once home prices took a turn for the worse, many of these loans defaulted at a fast clip.

Over time, it became clear that stated income was not the best way to measure a borrower’s ability to repay their obligations, especially when guaranteed home price appreciation was no longer around to pick up the slack.

The same seems to be true of loan modification performance, as evidenced by the conversion rate of mods under the Making Home Affordable program.

Loan servicers who have required income documentation prior to starting trial loan modifications have seen much greater success than those who haven’t asked for income documents upfront.

For example, subprime servicer Ocwen Financial Corp. (who required verified documentation) has seen an 83 percent success rate in converting trial loan modifications to permanent ones, while others accepting stated income have seen success rates as low as six percent.

In fact, juggernaut mortgage lenders like Bank of America, Wells Fargo, and Chase are seeing conversion rates at the low-end of the spectrum, at or around 25 percent, thanks in part to accepting stated income to get things going.

This seemingly haphazard approach (similar to the ways things were run prior to the crisis) may explain why 277,640 of the 1,214,085 trial loan modifications have already been canceled.

Fortunately, all loan servicers will be required to use verified income prior to starting a trial loan modification with an effective date on or after June 1.

That should result in a much better conversion rate for all loan servicers going forward, especially the big guys that don’t seem to be getting the job done. 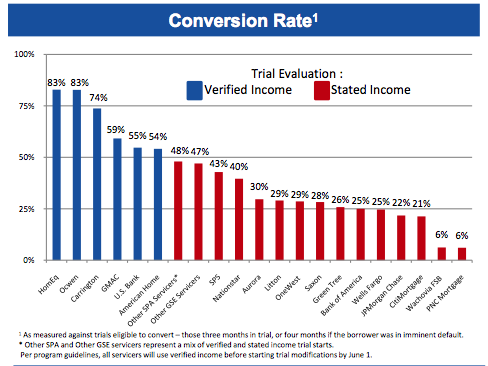