Despite the fact that economists always caution homeowners not to look at their homes as investments, people do. In fact, everyone does. How could you not, right?

If something goes up and down in value, and has the potential to make you money, a lot of it, it’d be hard to ignore.

Sure, a primary residence should be considered shelter above anything else, but there’s a reason you chose to buy a home as opposed to rent.

Aside from the tax benefits and the pride of ownership is the ability to get rich.

Unfortunately, everyone seemed to get a little caught up back in the mid ‘00s, namely 2006. During that fateful year, home prices hit what is now referred to as the real estate market’s peak.

Since then, home prices have yet to ascend to levels seen at that time in most cities across the nation.

However, recent gains have pushed us closer and closer, and some cities are already at new all-time highs, somewhat amazingly.

Look, no one likes to admit they overpaid for something, or spent more than their neighbor, but we know a lot of people paid a lot more than they should have for a home in recent years.

That would explain all those missed mortgage payments and strategic foreclosures. But even with bad timing factored in, the magic of the housing market has erased past mistakes for many.

In fact, home buyers who purchased properties at the peak in the fourth quarter of 2006 would have positive home equity in 58% of markets covered by NAR.

That’s right, even if you got caught up in the frenzy and decided to take the plunge when home prices were severely overheated, there’s a good chance you’d have positive equity today (if you stuck around).

Okay, maybe not if you took out an option arm with zero down, but the point is clear. Home prices have made their way back from the depths, and now many homeowners are sitting pretty.

In fact, buyers who purchased more recently (during 4Q 2010) would have positive home equity in 84% of the markets covered by NAR.

And buyers who purchased in 2011, 2012, and 2013 are probably in excellent positions, depending on when and where they purchased.

Let’s not forget their stellar mortgage rates either, with many enjoying long-term fixed rates in the 2-4% range.

Who Are the Big Winners? 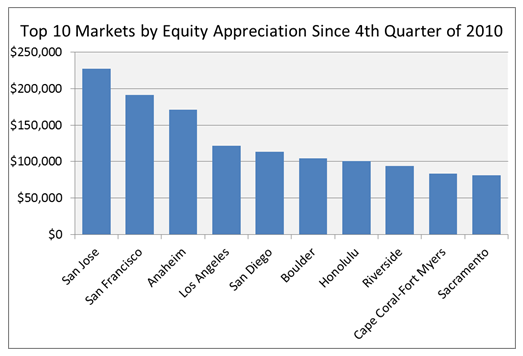 Pictured above is a chart from NAR that displays the biggest winners in terms of home equity appreciation since the fourth quarter of 2010.

As you can see, homeowners in San Jose, CA have enjoyed a very nice ride lately, with equity up over $200,000 in just three years!

San Francisco isn’t too far behind, nor is the home of the Happiest Place on Earth, Anaheim, CA.

Homeowners in Los Angeles have also been rewarded handsomely with over $100,000 in equity appreciation, along with those in San Diego and Boulder, CO.

Even inland parts of Southern California have chalked nearly $100,000 in gains, with hard-hit Riverside, CA making it into the top 10.

So I guess the moral of the story here is that time heals all wounds in the real estate market.

Just make sure you have the time to hang on. If you take out a mortgage you can’t afford, or buy too much home, you could be forced to unload at an inopportune time, not that a home should be looked at as an investment anyway.