These Two Maps Show Which States Are Ripe for Refinancing

They said loan origination volume fell to its lowest point last month since November 2008, a time when the mortgage industry was still grappling with the aftermath of the subprime crisis.

Additionally, they said property sales remained strong as all-cash purchases increased to over 40% of the total. In other words, fewer and fewer mortgages are being originated, even with home sales humming along just fine.

The only real winner of late has been home equity lending, which was up 26% last year compared to 2012, but still off more than 90% compared to levels seen in 2006.

And it’s only reserved for so-called “super-prime” borrowers with average credit scores close to 800.

Refinancible Population Has Fallen 13% in Just the Last Two Months

Turning to refinancing, which was huge less than a year ago, Black Knight noted that the refinancible population dwindled another 13% in just the past two months alone.

The ongoing issues include higher mortgage rates, the fact that most who could already refinanced, and a decline in HARP-eligible loans.

That has pushed overall originations down 60% year-over-year, with HARP volume down about 70% during the same period.

The volume of HARP refinances over the past year has reduced the refinancible population to just over 700,000 loans as of January 2014, compared to over 2.3 million a year earlier.

So where are these 700,000 remaining loans? Well, the following map shows which states have the highest percentage of HARP-eligible loans.

States with the Highest Percentage of HARP-Eligible Loans 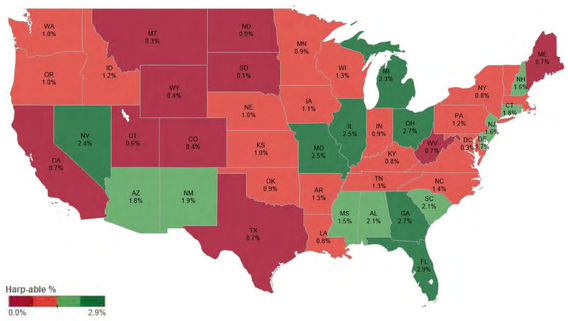 As you can see, there aren’t very many left in California, New York, or Texas. But there are a decent number in Midwestern states like Illinois, Michigan, Missouri, Ohio, along with hard-hit Florida and Georgia.

Nevada is still fairly HARPable, and Arizona to a lesser extent, but not as much as the aforementioned states.

In other words, those looking to originate HARP loans should focus on those states, seeing that the heavy hitters are already pretty much tapped out.

Interestingly, HARP 3 could bring an additional 2.5 million loans into the mix, though that assumes non-GSE loans become eligible, which at this point seems very, very unlikely. 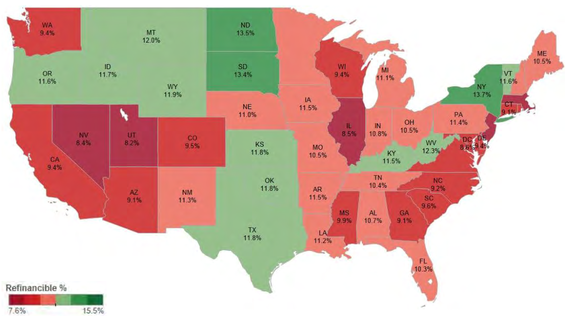 What about standard refis? While volume for those is down dramatically as well, there are still states with a higher percentage of eligible loans than others.

They ignore the Dakotas, despite the pair having the highest percentage of loans eligible for traditional refis (after NY), likely because volume is dismal there.

California and Florida still have numbers around 10%, but prepayment speeds indicate further declines in refinancing activity, so there’s not a lot to look forward to as a loan originator anymore.

Still, the mortgage industry always manages to come up with solutions for waning volume, so there’s no reason to panic.  Just find a good real estate agent to partner with ASAP.