What Time of Year Are Mortgage Rates Lowest? Here’s What The Data Says

Mortgage Q&A: “What time of year are mortgage rates lowest?”

We’re all looking for an angle, especially if it’ll save us some money. Whether it’s a stock market trend, a home price trend, or a mortgage rate trend, someone always claims to have unlocked the code.

Unfortunately, it’s usually all nonsense, or predicated on the belief that what happened in the past will occur again in the future.

Sometimes history repeats itself, sometimes it doesn’t. We probably only hear about the times when it does because it makes the individual behind it sound like a genius.

Now if you’re wondering if there is a “best time of year to get a mortgage,” the answer is there could be. And certainly better (and worse) times than others.

What Time of Year Are Mortgage Rates the Lowest? 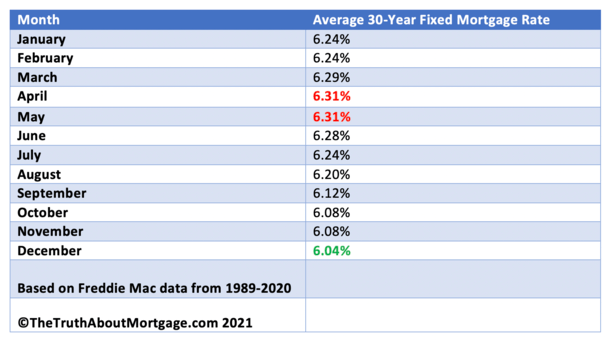 In reality, it’s very difficult to predict anything, even the weather, so when it comes to complex stuff like mortgage interest rates, success rates probably move a lot lower.

That being said, I set out to see if there were any mortgage rate trends we could glean from available data, using Freddie Mac’s historical mortgage rates that go back to 1971.

With 50 years of data at our fingertips, you would think some trends would appear, right?

Were mortgage rates lower in certain months, higher during others, or is it all just random? Let’s find out.

For the record, I looked at monthly averages for the 30-year fixed-rate mortgage over the past three decades to determine if there’s a winning month out there.

I omitted the way-back years (like the 70s and early 80s) because mortgage rates weren’t on the same level as they are nowadays.

The table above has also been freshly updated using data from both 2019 and 2020 for the most current results.

Perhaps You Should Shop for a Mortgage Instead of Holiday Gifts…

It turns out there is a month when mortgage rates are lowest, and as you might expect, it’s at a time when most folks wouldn’t even be thinking about purchasing a home or refinancing an existing mortgage.

Yes, it’s December. You know, when individuals are more concerned with holiday shopping and traveling to see family then calling up a mortgage lender.

Or when it’s much too cold to even think about doing anything super work-intensive like filling out a home loan application.

This could explain why mortgage rates are lowest in December. If you recall, lenders pass on bigger discounts to consumers when things are slow.

As alluded to, December is always going to be a slow month for mortgage lenders, which probably has something to do with the discount seen over the past 30 years.

Keep an Eye Out for a Mortgage Rate Sale

Similar to any other company out there selling goods, there are “sales” at certain times throughout the year, and also times when prices are marked up.

As you might expect, if a company is trying to move product, in this case home loans, what do they do? They lower the price to drive business.

Mortgage lenders able to lower the price, or rate, because they’ve got a margin built in to their market rate.

This margin acts as their profit, minus operational costs. Sure,they may not make as much per loan if they lower rates for consumers, but they could make up for it on volume.

Instead of closing one higher-priced loan, they might be happy to close three loans and earn more on aggregate. So they have wiggle room to play with rates a bit.

They can adjust them lower when business is crawling, and simply maintain or raise them when their phone won’t stop ringing.

How Much Cheaper Can They Really Be?

Okay, so we know rates vary throughout the year, and even a small difference in rate can be very meaningful. But how much can you really save?

While not massive by any stretch, you might be able to get a rate .25% lower in December versus April. Same goes for October and November compared to spring.

Keep your mortgage for a decade and you’ll pay nearly $5,000 more over that period.

Are You Overpaying for Your Home Loan and House in April?

Now speaking of April, that month tends to be prime time for home buying historically, which explains the lack of a discount.

The same goes for buying a home during April – it’s a lot less common to see a price reduction during spring than it is during fall or winter.

It all begs the question; should we buy homes when prices, competition, and interest rates are lowest? Probably.

Just one problem – there tends to be less available inventory in the fall and winter months as well. But if you do come across something you like, it could be a great time to snag a deal.

In other words, you should always be looking, even if it’s not the ideal time to move.

If you’re refinancing a mortgage, there are less obstacles in December since you’ve already got a house.

To sweeten the deal, lenders probably aren’t busy, so you’ll breeze through underwriting a lot quicker. And you could receive a little more attention from your loan officer.

Should I Wait Until December to Get a Mortgage?

In short, probably not. While December had the lowest mortgage rates on average over the past 30 years, there were plenty of years when rates were higher in December compared to other months.

Same goes for 2015 and 2016, when rates were markedly higher in December versus the beginning of the year.

All in all, you’re probably better off paying attention to what’s going on in economy if you want to predict the direction of mortgage rates.

The trend (moving up or down over a period of time) might be more important than the month of year.

Time of year aside, you might be able to save even more on your mortgage simply by gathering quotes from more than one lender.

Ultimately, timing doesn’t seem to be the biggest driver of rates, nor is it something most of us can control anyway.