Are Mortgage Rates Negotiable? How to Haggle Your Way to Big Savings

Here’s a popular question everyone looking for a mortgage wants to know (or should want to know).

And it’s an especially important one if you’re actively shopping for a home loan, since the clock is probably ticking and you’ve got work to do.

Can you get an even lower rate than the quote you just received? Or do lenders really have their hands tied? Let’s dig right in.

You Should Be Able to Negotiate Your Mortgage Rate 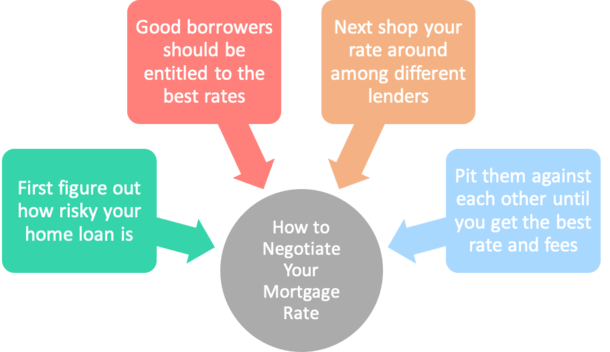 In most cases, mortgage rates are 100% negotiable, like many other costs involved with obtaining a mortgage, such as the loan origination fee.

This was especially true back before the mortgage crisis, but a little more complicated these days thanks to compliance issues.

There are also some online lenders today that don’t use loan officers, nor pay out commissions based on rates. So in these cases, you can’t really negotiate with the company directly.

But if there is an individual involved, which there often is, there’s a good chance you’ll be negotiating.

Like anything else you shop for, you may be told that prices/rates are firm, or are as low as they can go. Psssh.

This isn’t the case, as mortgage rates can always be adjusted up or down in a variety of different ways, and commissions and fees can often be lowered or waived.

Even if the rate can’t be flat-out lowered, you can buy down your interest rate by paying mortgage discount points.

This isn’t pure “negotiation” because you’re actually paying prepaid interest upfront to lower costs during the loan term, but it does prove that mortgage rates can be adjusted.

The opposite is also true – like in the case of a no cost refinance, where you pay nothing out-of-pocket, but take on a higher mortgage rate to compensate the originator for that lack of costs.


A more pure form of negotiation involves comparing rates for the same product from a variety of different banks and lenders.

Before you do that, it’s important to understand if your home loan is low-risk or high-risk.

Simply put, lower-risk loans are entitled to the best interest rates available, whereas risky loans will be subject to pricing adjustments that can drive the rate much higher.

Once you have an idea of what you should be charged, you can start making phone calls.

First, you’ll want to obtain multiple rate quotes from a single lender, by asking for a series of interest rate/cost combinations, as discussed above.

So if the loan officer or mortgage broker offers you a rate of 4.75% on a 30-year fixed with $2,500 in closing costs, you can ask for other options.

After getting all those quotes, jot them down, then shop around with other lenders to see who has the best mortgage rate and lowest fees.

Go Back to the Lender Who Provided the Best Quote

Once your shopping is complete, you can go back to the lender who offered you the best deal and ask for a slightly lower rate or reduced closing costs.

You can do this by using another bank or broker’s offer as leverage, even if it doesn’t really exist.

There’s a chance you’re not getting the rock-bottom rate the first time around, so why just accept it as the best offer?

Always haggle! Especially when something has the potential to hit your pocketbook for the next 360 months!

Mortgage brokers in particular should really be able to negotiate rates because they work with multiple lenders and may have flexible compensation plans.

This means they can provide you with rate quotes from a variety of different banks at once, and if the rate(s) isn’t good enough for you, they might just come up with a lower one from a different lending partner of theirs.

Of course, you’ll never know this if you don’t take the time to ask or complain that the initial rate is too high!

Conversely, someone working at a big bank may just be limited to what their computer program tells them.

In this case, they may not actually be able to go lower, but that doesn’t mean you can’t just pick up the phone and try other lenders.

Use the Competition to Your Advantage When Negotiating


The mortgage industry is a very competitive space, so mortgage lenders and their representatives will always be willing to work with you to snag your business, assuming you actually qualify.

They may make a little less in the way of commission, but still enough to want to close your loan.

Don’t believe it when they tell you they’re “just breaking even” or “not making enough” to do the deal.  This is simply their justification to make more money while you pay more.

In the end, they need your business more than you need theirs, so remember that during negotiations.

There are also loan originators who work on volume, so for them, just getting your deal, even if they aren’t making a whole lot on the loan itself, could boost their profits and be well worth their while.

Be sure to compare mortgage rate quotes online, visit local banks, and speak to a few mortgage brokers.

It’s a big deal to get a mortgage, so why stop at just one or two quotes? Negotiating is a lot easier when you’re pitting multiple lenders against one another.

All that talking the talk may also make you a fiercer opponent when speaking to subsequent lenders. You’ll actually sound like you know what you’re talking about.

Just make sure you actually lock your mortgage rate when you’re happy with the deal.

If it’s not locked, the interest rate isn’t guaranteed. And if anything, it’s more than likely going to rise from the quote you originally received.

This failure to lock might be why we hear so many “bait and switch” stories from borrowers. A few days go by, the market worsens, and the original rate is no longer available. Often it’s the truth!

At the end of the day, everything in life is negotiable if you’re willing to speak up and ask for a lower price, or in the case of a mortgage, a lower rate.

It always amazes me how folks simply accept what’s thrown in front of them. The first price is never the best price!

Tip: What mortgage rate can I expect?

15 thoughts on “Are Mortgage Rates Negotiable? How to Haggle Your Way to Big Savings”