What Is a Conforming Mortgage? A Loan That Meets the Guidelines of Fannie or Freddie

For the sake of simplicity, a “conforming mortgage” is a home loan with a loan amount up to $548,250 that also fits underwriting guidelines set forth by Fannie Mae and Freddie Mac.

This maximum loan amount increased from $510,400 in 2020, and tends to change each year in January, based on prior year home price movement.

Because conforming home loans adhere to underwriting rules set by Fannie and Freddie, which include credit and income requirements, they are considered lower risk and are more easily sold to investors in bulk on the secondary market.

In a sense, they are highly homogenized products that can be easily priced and sold by lenders after origination, which in a sense makes them more valuable, or at least more liquid.


As a result of the many rules lenders must follow to originate a conforming loan, such mortgages tend to carry lower mortgage rates than jumbo loans (those above the conforming loan limit) because of enhanced liquidity and strong investor demand.

In other words, you should be able to get a cheaper mortgage rate, all else being equal, if your home loan conforms to Fannie Mae and Freddie Mac’s standards.

For this reason, borrowers will often put more money down to stay under this important loan limit, or get a combo loan and keep the first mortgage in conforming loan territory.

Doing so will allow them to get a lower interest rate and/or expand their financing options as more lenders out there offer conforming loans than jumbo loans.

Aside from loan amount, Fannie and Freddie require a minimum FICO score of 620 unless a special circumstance (like non-traditional credit) applies.

This is perhaps one of their most important qualifying criterion other than loan size.

If the loan amount exceeds the loan limit (jumbo loan) or doesn’t meet the guidelines of Fannie or Freddie, it is known as a non-conforming loan.

In this case, you may need to seek out a portfolio lender or look to government loan programs instead like FHA/VA/USDA, which have lower credit score requirements.

When Does the Conforming Loan Limit Change?

The conforming loan limit changes annually, as determined by the FHFA, based on October-to-October home price data.  It is announced in November and goes into effect the following January.

The Emergency Home Finance Act of 1970 originally established a conforming loan limit of $33,000 for Fannie Mae and Freddie Mac.

Not long after, the Housing and Community Development Act of 1980 increased the loan limit to $93,750 and tied future increases to changes in national home prices.

The conforming loan limit has risen substantially in the past thirty years as housing prices have skyrocketed in the United States, but a good chunk of mortgages in major metropolitan areas are still designated as jumbo loans because the data tends to lag.

Below are the 2021 conforming loan limits for properties in the contiguous United States:

*For one-unit properties in Alaska, Hawaii, Guam, and the U.S. Virgin Islands, the conforming loan limit is $822,375, which is 50% higher than the baseline. 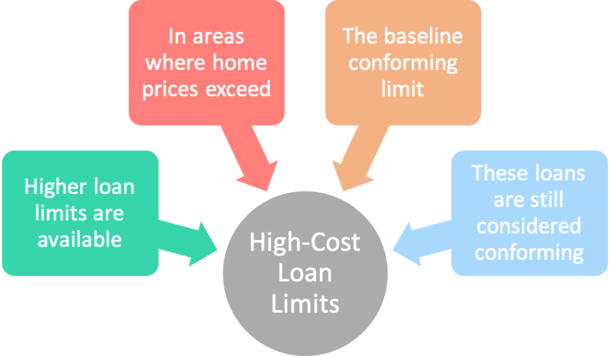 The Economic Stimulus Act of 2008 temporarily increased the conforming loan limit in high-cost areas, pushing it to as much as $822,375 in expensive metropolitan areas of the United States such as Los Angeles.

The loan limits were increased because lenders generally only made loans backed by Fannie and Freddie (which carried an implicit government guarantee) after the mortgage crisis wiped away private capital.

In other words, it didn’t make much sense to originate a jumbo loan, as it carried far too much risk, so these higher limits ensured lenders could sell off their loans and continue lending.

These limits stayed in place until September 30, 2011, at which point the Housing and Economic Recovery Act (HERA) “permanent” loan limits kicked in, which currently max out at $822,375 in the contiguous United States.

These types of loans are often referred to as “conforming jumbo loans” because they conform to Fannie and Freddie’s standards despite being over the traditional conforming loan limit.

Below are the 2021 high-cost loan limits for properties in the contiguous United States:

*Alaska, Hawaii, Guam, and the U.S. Virgin Islands do not have high-cost areas in 2020.

Use Combo Loans to Stay Under the Conforming Loan Limit

Homeowners can avoid exceeding the conforming limit by breaking their loan up into a first and second mortgage, known as a combo mortgage.

For example, if you keep your first loan amount at $548,250 (or $822,375 in a high-cost area), you can add a second mortgage behind it without breaking the conforming limit.

Also keep in mind that second mortgages typically come with much higher mortgage rates than first mortgages, along with their own set of closing costs and fees. You may also have to deal with two different lenders at once.

Another way to avoid going jumbo is to put more money down (if you’re able to), or simply by “less house.”

Be sure to explore all options if your loan amount is close to the conforming limit as it could save (or cost) you quite a bit of money.

We’ll see if the conforming loan limit increases again in 2022…it probably will with home prices still appreciating fairly rapidly.

16 thoughts on “What Is a Conforming Mortgage? A Loan That Meets the Guidelines of Fannie or Freddie”