It’s that time again, where I take a look at a pair of popular home loan programs to determine which may better suit certain situations.

As always, there is no one-size-fits-all solution because everyone is different and may have varying real estate and financial goals.

For example, it depends if we’re talking about a home purchase or a mortgage refinance.

Or if you’re a first-time home buyer with nothing in your bank account or a seasoned homeowner close to retirement.

Ultimately, for home buyers who can only muster a low down payment, a 30-year fixed-rate mortgage will likely be the only option from an affordability and qualifying standpoint.

So for some, the argument isn’t even an argument, it’s over before it starts.

But let’s explore the key differences between these two loan programs so you know what you’re getting into. 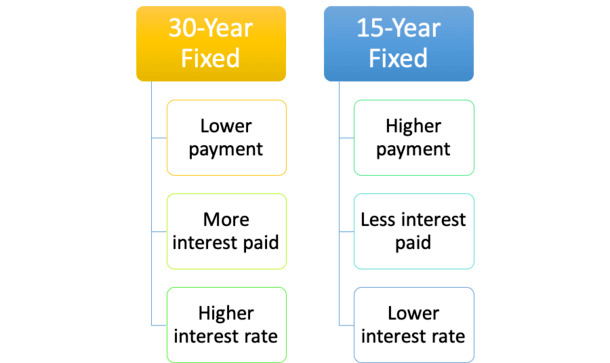 Two of the most commonly utilized home loan products available to homeowners today are the 15-year fixed-rate mortgage and the 30-year fixed mortgage.

They are very similar to one another in the way they function (both offer fixed rates for the entire loan term), but one is paid off in half the amount of time.

That can amount to some serious cost differences and financial outcomes.

While it’s impossible to universally choose one over the other, we can certainly highlight some of the benefits and drawbacks of each.

As seen in the chart above, the 30-year fixed is cheaper on a monthly basis, but more expensive long-term because of the greater interest expense.

The 30-year mortgage rate will also be higher relative to the 15-year fixed to pay for the convenience of an additional 15 years of fixed rate goodness.

Meanwhile, the 15-year fixed will cost a lot more each month, but save you quite a bit over the shorter loan term thanks in part to the lower interest rate offered. 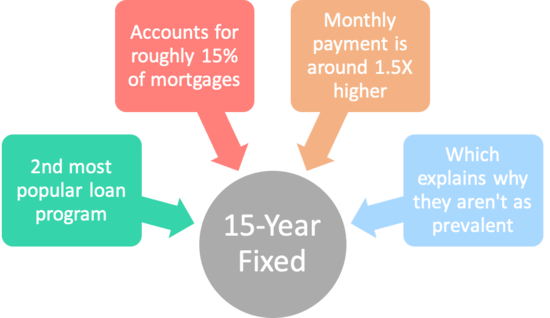 The 30-year fixed-rate mortgage is easily the most popular loan program available today.

Around 70% of all mortgages today are 30-year fixed products, whereas the percentage of mortgages that are 15-year fixed loans is roughly 15%.

While this number can certainly fluctuate over time, it should give you a good idea of how many borrowers go with a 30-year mortgage vs. 15-year mortgage.

Well, the simplest answer is that the 30-year mortgage is cheaper, much cheaper than the 15-year, because you get twice as long to pay it off.

Most mortgages are based on a 30-year amortization schedule, whether they are fixed or not (even ARMs), meaning they take 30 full years to pay off.

The 30-year fixed is the most straightforward home loan program out there because it never adjusts during this industry standard 30-year term.

The lengthy mortgage term allows home buyers to purchase relatively expensive real estate without breaking the bank, even if they come in with a low down payment.

It also means paying off your mortgage will take a long, long time…possibly extending into retirement, or pushing it back even further.

In short, it’s safe and easy to wrap one’s head around, not to mention affordable due to that long loan term, and as such is very popular.

This is why it’s heavily advertised and touted by most housing counselors and mortgage lenders alike.

Simply put, you can afford more house with the 30-year fixed, which explains that 90% market share when it’s a home purchase.

Meanwhile, the 15-year fixed-rate market share is significantly higher on refinance mortgages because borrowers don’t want to restart the clock once they’ve already paid down their loan for a number of years.

Well, at least if you’re intent on paying off your mortgage at some point in this lifetime.

And it’s more affordable to go from a 30-year fixed to a 15-year fixed because your loan balance will be smaller than at the outset, and ideally interest rates will be lower as well.

This combination could make a 15-year loan more manageable, especially as you get your bearings when it comes to homeownership.

Now despite the overwhelming popularity, there must be some drawbacks to the 30-year mortgage, right? Of course there are… 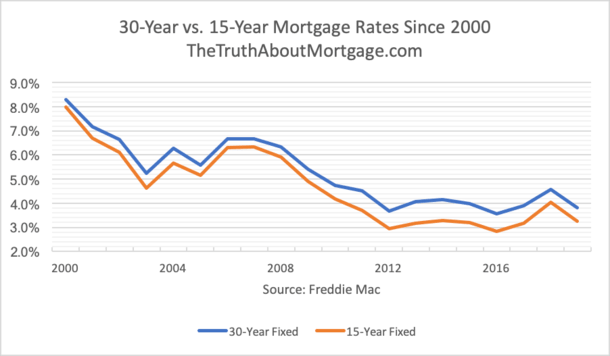 First and foremost, you pay a premium for a 30-year mortgage vs. a 15-year mortgage in the form of a higher interest rate, even though both offer fixed rates.

Simply put, because you get more time to pay off the mortgage, there is a cost associated.

After all, mortgage lenders are agreeing to give you a fixed interest rate for double the amount of time, which is certainly a risk for them, especially if interest rates rise significantly during that period.

For that reason, you’ll find that 15-year mortgage rates cost quite a bit less than those on a 30-year loan product.

In fact, at the time this was written, mortgage rates on the 30-year fixed averaged 3.00% according to Freddie Mac, while the 15-year fixed stood at 2.29%.

That’s a difference of 0.71%, which is certainly very significant and should not be overlooked when deciding on a loan program.

In general, you may find that 15-year mortgage rates are about 0.50% – 0.75% lower than 30-year fixed mortgage rates. But this spread can and will vary over time.

So the 15-year has been enjoying a wider spread lately, though that could narrow over time.

While the lower interest rate is certainly appealing, know that the 15-year fixed-rate mortgage comes with a higher monthly mortgage payment because you have 15 fewer years to pay it off.

Ultimately, when you have less time, higher payments are required to extinguish the balance.

If we consider a $200,000 loan amount, which isn’t necessarily that large, the monthly mortgage payment would be $470.69 higher on the 15-year mortgage because it’s paid off in half the amount of time.

So despite the lower interest rate on the 15-year fixed, the monthly payment is still significantly higher, about 56% more expensive.

Take a look at the numbers below, using those Freddie Mac average mortgage rates:


This means loan amounts might be limited for those who opt for the shorter term from an affordability standpoint.

That’s more than $67,000 in interest saved over the duration of the loan if you went with the 15-year fixed as opposed to the 30-year mortgage. Pretty substantial, eh.

You’d also build home equity a lot faster, as each monthly payment would allocate much more money to the principal loan balance as opposed to interest.

But there’s another snag with the 15-year fixed option.  It’s harder to qualify for because you’ll be required to make a much larger payment each month, meaning your DTI ratio might be too high as a result.

So for a lot of borrowers stretching to get into a home, the 15-year mortgage won’t even be an option, even if you prefer it. The good news is I’ve got a solution, which is outlined below.

Most Homeowners Hold Their Mortgage for Just 5-10 Years

Now obviously nobody wants to pay an additional $67,000 in interest, but who says you will?

Most homeowners don’t see their mortgages out to term, either because they refinance, prepay, or simply sell their property and move. So who knows if you’ll actually benefit long-term?

You may have a well-thought-out plan that falls to pieces in 2-3 years, and those larger monthly mortgage payments could come back to bite you if you don’t have adequate savings.

What if you need to move and your home has depreciated in value? Or what if you take a pay cut or lose your job?

No one foresaw a global pandemic, and for those with 15-year fixed mortgages, the payment stress was probably a lot more significant.

Ultimately, those larger mortgage payments will be more difficult, if not impossible, to manage each month if your income takes a hit.

And perhaps your money is better served elsewhere, such as in the stock market or tied up in another investment, one that’s more liquid, which earns a better return.

Even if you’re determined to pay off your mortgage, you could go with a 30-year fixed and make extra mortgage payments each month, with the excess going toward the principal balance.

This flexibility would protect you in periods where money was tight, and still knock several years off your mortgage, assuming larger payments were made fairly regularly.

And there are always biweekly mortgage payments as well, which you may not even notice leaving your bank account.

It’s also possible to utilize both loan programs at different times in your life.

For example, you may start your mortgage journey with a 30-year loan, and later refinance your mortgage to a 15-year term to stay on track if your goal is to own your home free and clear before retirement.

In summary, mortgages are, ahem, a big deal, so make sure you compare plenty of scenarios and do lots of research (and math) before making a decision.

Most consumers don’t bother putting in much time for these mortgage basics, but planning now could mean far less headache and a lot more money in your bank account later.