Fixed-Rate Mortgages vs. ARMs: Which to Choose?

Mongoose vs. Cobra. Coyote vs. Roadrunner. Pirate vs. Ninja?  And finally, “fixed-rate mortgage vs. adjustable-rate mortgage.”  Yes, we’re talking about the greatest rivalries of all time. 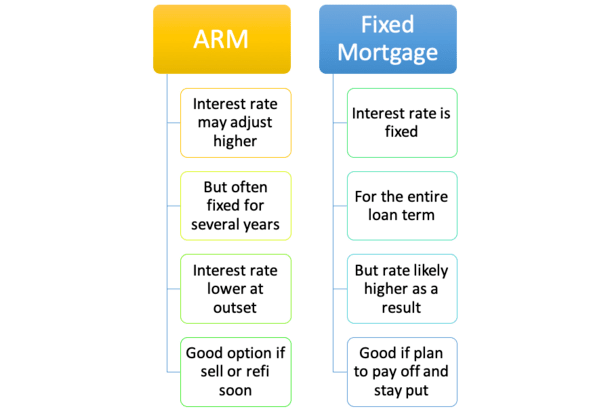 During the housing boom in the early 2000s, homeowners often chose adjustable-rate mortgages as a means to qualify for a home they probably wouldn’t be able to afford with a traditional fixed mortgage.

Back then, you could qualify a borrower at the ARM’s lower start rate, even though the loan would eventually adjust much higher.

Even if they could afford a fixed-rate loan, homeowners were happy to take the lowest interest rate possible, which typically came with the ARM.

But times have changed, and adjustable-rate mortgages have now fallen out of fashion with fixed-rate mortgage rates hovering near record lows.

In fact, fixed-rate mortgages account for more than 90% of the purchase money mortgages and refinance loans being originated nowadays.

Sure, fixed mortgages are definitely more popular, but that doesn’t mean they’re any better, or always the right choice.

It’s just a matter of preference for most.  And as homes become less and less affordable, the popularity of ARMs will rise once more.

Fixed-Rate Mortgages Like the 30-Year Are the Default Option

When taking out a mortgage, most people tend to choose a fixed-rate mortgage, making it the default option.

The most popular of the fixed mortgages is the 30-year fixed, seeing that the payment is fixed for the entire term of the loan, and the long amortization period keeps monthly payments low.

The 15-year fixed-rate mortgage is also pretty popular, but because the entire balance must be paid off in half the amount of time, monthly payments are much higher.  That means fewer borrowers are willing or able to choose one due to affordability concerns.

Typically, a homeowner will start with a 30-year fixed, then when it comes time to refinance, they’ll go with a 15-year fixed to stay on track and avoid resetting the clock.

There are also adjustable-rate mortgages, which most borrowers tend to avoid unless they are extremely savvy investor-types, ultra-rich, or instructed to do so by their mortgage broker or loan officer.

I say savvy because some folks will take a chance on the initial interest rate discount offered on ARMs despite the associated risk of a higher interest rate in the future.

So you need to know what you’re doing when selecting an ARM, and most importantly, have the capacity to absorb any interest rate adjustments in the future.

As mentioned, there were also those borrowers who had to take out an adjustable-rate mortgage to qualify because the interest rate was lower.

This was a routine practice before the mortgage crisis, with the ARM option typically floated by the real estate agent, broker, or loan officer whether it was in the borrower’s best interest or not.

This isn’t as common nowadays because it’s not necessarily easier to qualify for an ARM since you often need to qualify at the fully-indexed rate.

What Type of ARM Are We Talking About?

The big question when debating the fixed vs. ARM decision is what type of adjustable-rate mortgage are we dealing with?

These days, it’s quite common to take out an ARM with an initial fixed-rate period, such as a 5/1 ARM or a 7/1 ARM.

The above examples are fixed for the first five and seven years, respectively, before becoming annually adjustable for the remainder of the term. They’re known as hybrid ARMs for that reason.

There’s even an option that is fixed for 10 years before its first adjustment, making it relatively low-risk.

And all of these ARMs are amortized over a 30-year period, meaning they will take 30 years to pay off, assuming you hold them until maturity (which most borrowers don’t).

So they are the same as a fixed-rate mortgage in terms of length, and if you only keep them for five or seven years, they act no differently regarding how much principal and interest is paid.

Actually, you’d likely pay off more of your principal balance and pay less interest due to the lower interest rate on the ARM.

The major difference is that the 30-year fixed is, ahem, fixed, while the ARMs are, you guessed it, adjustable. By adjustable, I mean your mortgage rate can move up, down, or sideways.

This obviously presents some serious risk, assuming mortgage rates rocket higher during the few short years you hold the loan.

ARMs Can Go Up and Down

While it’s possible that mortgage rates could move lower in the future, they’re still near record lows and will more than likely rise over the next few years.

So an ARM you obtain today will probably reset higher upon its first adjustment, meaning your monthly mortgage payment will go up.

If you can’t handle that hypothetical higher mortgage payment, you may want to stick with the 30-year fixed, even if it’s slightly higher today.

But will you stay in the home for 5-7 years, or will you move. And will you refinance before that time?

If there’s a good chance you will do either, an ARM could make more sense than a fixed-rate mortgage.

For example, if you are buying your first home, but plan to move or upgrade to a better home as you start a family, an adjustable-rate mortgage might be the best option short-term.

And the money saved during those few years can be used for a down payment on the next home. Additionally, the lower interest rate increases affordability during the months it’s held.

Meanwhile, it hasn’t been uncommon lately for homeowners to choose a 30-year fixed, then refinance into another 30-year fixed shortly after once rates improved.

At the moment, mortgage indexes tied to ARMs are so low that your first rate adjustment could result in a lower rate, assuming there isn’t a floor on the rate.

For example, many of these ARMs are tied to the LIBOR, which is currently around 0.25%. If the margin is 2.25, your mortgage rate would drop to around 2.50%, assuming the caps/floor allowed for it.

However, this low rate environment won’t last forever, so someone who elects to go with this type of ARM will likely suffer long-term.

Most will probably have to refinance or sell before that happens. That’s why short-term ARMs are typically reserved for the very wealthy, who have the option to refinance or pay off the loan whenever they choose.

If you go with an ARM and don’t have the option to pay it off or refinance, you could be stuck with a rising payment, which could put your mortgage (and property) in jeopardy.

Also note that both fixed-rate mortgages and ARMs require active participation. Just because your loan has a fixed rate doesn’t mean you don’t have to keep an eye on rates.

If rates move lower, you may lose out if you don’t refinance your fixed-rate mortgage. So it’s not as set-it-and-forget-it as it appears.

Does the Initial Discount of an ARM Justify the Risk?

Be sure you’re getting a good discount on the ARM in exchange for the uncertainty and risk of it rising in the future.

Currently, 30-year fixed mortgage rates are hovering around 3%, while the 5/1 ARM is pricing around 2.50%, depending on the lender.

This spread isn’t great at the moment, meaning ARMs aren’t too favorable.

If we’re talking about a short-term ARM, such as a 1-month or 1-year ARM, it better save you a considerable amount of money early on.

You’d also pay about $6,000 less in interest during that time, with more of your hard-earned dollars going toward the principal balance.

If and when fixed interest rates rise, the ARM will provide more value, assuming spreads widen.

Not bad, but is it worth the risk? Well, that depends on a number of factors.

As mentioned, if you don’t plan to stick around in the home long or hold the mortgage for the full loan term, it could be a great move.

But interest rates are likely headed higher, so you may pay the price later once the ARM adjusts. And it may be more difficult to refinance in the future…

Risk appetite, age (retirement), job status, investment strategy, and downright stress will also come into play, so be sure to do plenty of math and compare different scenarios before deciding on anything!

Simply put, you’re taking a risk when choosing an ARM (hence the discount), so take a hard look at the numbers compared to fixed rate options.

While an adjustable-rate mortgage provides financing at a discount, it comes with much more uncertainty, especially in today’s market.

And if it’s really a goal to pay off your mortgage, a fixed mortgage is generally the best option for most.

Tip: If you buy an owner-occupied property that you intend to later rent out for the long-term, a fixed-rate mortgage might be a good pick because you’ll probably keep the loan for a long period of time.

And chances are you won’t want to refinance the loan since financing is more expensive on investment properties.

When Is an Adjustable-Rate Mortgage Is a Good Idea?

When a Fixed-Rate Mortgage Might Be the Better Call

previousBetter Will Now Guarantee Your Mortgage Even If the Appraisal Comes in Low
nextPeoples Mortgage Company Review: A Highly-Rated Arizona-Based Lender