The Buydown Loan: How to Get a Lower Rate the First Couple Years on Your Mortgage

Today we’re going to talk about a “buydown loan,” the latest effort by the mortgage industry to provide much-needed payment relief to borrowers.

These higher rates have also had a big impact on the mortgage industry, which is typically reliant on low rates to fuel its important mortgage refinance business.

Mortgage lenders understand the impact these higher rates have had on borrowers and prospective home buyers, so there’s a good chance you’ll see more of these offers pop up soon.

Let’s discuss how these buydown mortgages work, if they can save you money, and the general pros and cons.

What Is a Buydown Mortgage? 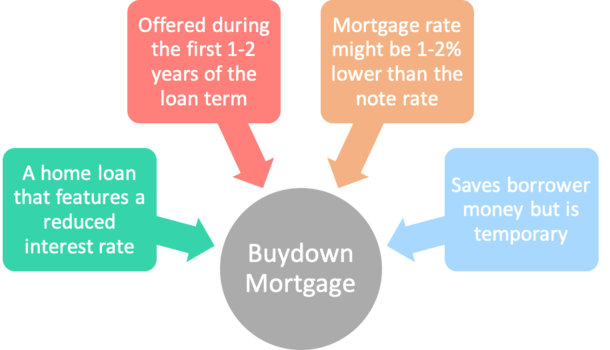 In short, a buydown mortgage is a home loan that features a reduced interest rate for a temporary period of time, whether it’s one, two, or three years.

An upfront cost covers these lower monthly payments, with the required funds set aside in a buydown account.

Each month during the temporary buydown period, the borrower makes a reduced monthly payment, with the additional amount released from the buydown account to cover the difference.

This makes monthly payments more affordable during the beginning of the loan term.

Typically, borrowers opt for these buydowns because they expect their income to increase in the near future. Or the buydown is offered by a home builder or home seller to sweeten the deal.

To that end, these buydowns are often paid by a home seller or builder, or perhaps a mortgage lender.

It may also be possible to apply seller concessions toward a temporary mortgage buydown.

There are several buydown loan options out there, with the “2-1 buydown” perhaps the most common.

As the name suggests, it lowers your interest rate by a full 2% the first year, and 1% the second year.

That’s about $8,600 total, which would need to be earmarked to cover the buydown cost over those two years.

There is also a “3-2-1 buydown,” which is perhaps less common given the enormous expense involved.

This type of buydown lowers the interest rate by 3% the first year, 2% the second year, and 1% the third year.

After that, your mortgage rate returns to the note rate for the remainder of the loan term.

Going the opposite way, you might come across a “1-0 buydown,” which is simply a 1% reduction the first year.

In mid-September 2022, Rocket Mortgage launched its so-called “Inflation Buster,” a 1-0 buydown that provides customers with a reduced interest rate during the first 12 months.

For example, instead of a rate of 5.75%, they might get a rate of 4.75% for the first year, with Rocket covering the difference in monthly payment automatically. 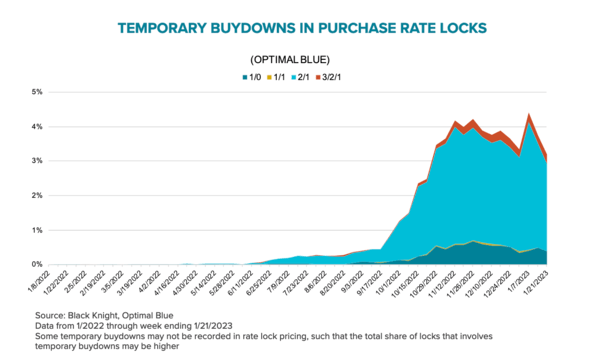 Note that temporary buydown periods typically can’t exceed three years. So the options above will likely be the only terms available.

Additionally, the annual increase in mortgage rate is generally capped at 1%, probably to avoid payment shock.

As noted, borrowers still need to qualify at the full note rate in most instances, unless a borrower is expected to see a large increase in future income (for certain loan types).

Buydowns are also only permitted on certain property types, such as primary residences and second homes, with investment properties often prohibited.

But can be used in conjunction with an FHA loan, VA loan, or conforming mortgage backed by Fannie Mae or Freddie Mac.

It may be possible to use a temporary buydown on an adjustable-rate mortgage with the VA or Fannie/Freddie, but not the FHA.

The buydown funds are also not refundable unless the mortgage has been paid off ahead of time, in the case of a refinance or home sale.

If this were to happen, the proceeds would typically go toward paying off the mortgage or be returned to the borrower.

In other words, you’re not really saving any money, you’re simply allocating funds in a different manner.

Basically, paying upfront instead of monthly, though if someone else is footing the bill, it can be considered a money-saving move.

Also note that mortgage lenders typically still require you to qualify at the actual note rate. So if the post-buydown rate is 5.5%, you need to qualify at that rate, even if you get a 3.5% rate in year one.

In the past, some underwriters may have allowed a lower qualifying rate, but that became a big no-no after the housing crisis in the early 2000s (VA loans might be the exception).

So what’s the point then? Well, as noted, if a third party is covering the cost of the buydown, why not take it?

Or if you have extra funds from a home builder or seller that can’t be used otherwise, or you don’t want to use them toward say the down payment or other closing costs.

But perhaps a better alternative is paying mortgage discount points, which result in a lower interest rate for the entire loan term. This is known as buying down your rate, on a permanent basis.

For example, you might pay one point upfront for an interest rate that is .375% lower for the entire 30-year loan term.

Another option is to go with an adjustable-rate mortgage that offers a fixed-rate period the first five or seven years (5/1 ARM or 7/1 ARM). You actually save money via a lower interest rate.

And in the case of discount points, save money once the breakeven period has passed.