Assumable Mortgages: A Little Known Tool You Can Use Now That Interest Rates Have Surged Higher

Everyone knows mortgage rates are no longer super cheap. The popular 30-year fixed was in the 2% range just last year and today is closer to 5.5%.

And it’s possible mortgage rates could move higher before they move lower, though they could be close to peaking.

For existing homeowners, this has created a strange dynamic where they are effectively “locked-in” by their low rates.

In other words, they have less incentive to move out if they need to buy again and subject themselves to a higher interest rate on their next home purchase.

But if their mortgage is “assumable,” they could use it as a leverage to sell their home for more money.

How an Assumable Mortgage Works 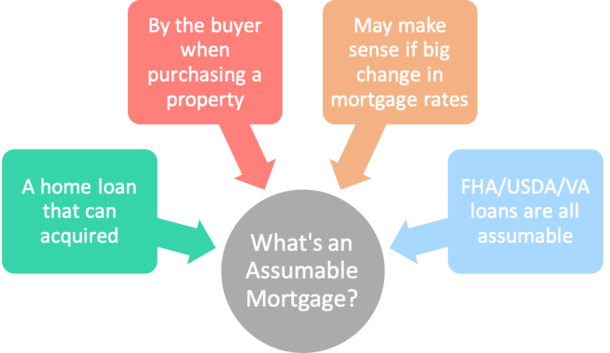 An “assumable mortgage” allows a home buyer to take on the home seller’s existing mortgage.

This includes the remaining loan balance, mortgage term, and mortgage rate, as opposed to getting their own brand new loan.

The main purpose of assuming the seller’s loan is to obtain an interest rate below the prevailing market rate.

So if mortgage rates increase rapidly in a short period of time, it could be in the best interest of the buyer to see if they can assume the seller’s mortgage.

A recent report from Black Knight revealed that something like 25% of all outstanding first-lien mortgages have an interest rate below 3%!

So clearly there’s opportunity here now that interest rates are 5%+ and potentially rising.

Example of how an assumable mortgage can save you money:

If a seller obtained an assumable mortgage at 2021’s low rates, at say 2.75% on a 30-year fixed mortgage, they could transfer it to a buyer in the future.

This would make sense if mortgage rates increased significantly between the time they received their home loan and when it came time to sell.

The scenario above isn’t all that far-fetched, and in fact mortgage rates could rise even higher over the next several years.

And you better believe a future buyer would be more than happy to take the 2.75% interest rate versus a 6% rate.

They could also potentially avoid some of the settlement costs associated with taking out a fresh home loan.

Of course, if rates remain relatively flat or go down, the assumable mortgage won’t make much sense. This was the case for many years until just lately.

Additionally, not all mortgages are assumable, so this strategy doesn’t work for everyone.

What Types of Mortgages Are Assumable?

These days, most conventional mortgages are not assumable.

Before December 1, 1986, FHA loans generally had no restrictions on their assumability, meaning there weren’t any underwriting hoops to jump through.

And some FHA loans originated between 1986 and 1989 are also freely assumable, thanks to Congressional action that determined certain language was unenforceable.

But let’s be honest, most of those old loans are probably either paid off, refinanced, or have very small remaining balances, so no one in their right mind would want to assume them.

FHA loans closed on or after December 15, 1989 need to be underwritten if assumed, just as they would if they were new loans.

In other words, underwriters will need to review a potential borrower’s income and credit to determine their eligibility.

Additionally, it should be noted that investors are not able to assume newer FHA loans, only owner-occupants. So the property should be your primary residence.

VA loans are also assumable, and require lender approval if closed after March 1, 1988, but understand that there are some complicated issues that revolve around VA eligibility.

For example, if the borrower who assumes your VA loan defaults, you may not be eligible for a new VA loan until the loss is repaid in full.

Is an Assumable Mortgage Worth the Trouble?

As you can see, while they have the potential to be a big money-saver, assumable mortgages aren’t entirely cut and dry.

First and foremost, be sure to get a liability release to ensure you aren’t accountable if the borrower who takes over your mortgage defaults in the future.

You won’t want to be on the hook if anything goes wrong, nor have to explain to every future creditor what that “other loan” is on your credit report.

Additionally, understand that an assumable mortgage will likely only cover a portion of the subsequent sales price.

Because the mortgage balance will be somewhat paid off when assumed, and the property value will likely have increased, you’ll either need to come in with a large down payment or take out a second mortgage when assuming a mortgage.

If you need a second mortgage, you should do the math to ensure it’s a better deal with the blended rate factored in versus a brand new first mortgage.

If You’re a Seller, Mention It, If Buying a Home, Ask If It’s Assumable

The assumable mortgage hasn’t been on anyone’s radar over the past couple decades because mortgage rates kept creeping lower and lower.

But now that they’re surging higher and higher, you’ll likely hear more about them. Just know the many pitfalls and drawbacks involved.

If you’re a homeowner with an assumable mortgage, you could use it as a tool to sell your home more quickly and/or for more money.

Or perhaps help a home buyer qualify for a mortgage who otherwise might not at current market rates.

If you’re a prospective home buyer, it’s worth asking if the home seller’s loan is assumable. It could save you some money if the spread between their rate and current rates is wide.

Lastly, for those thinking they can make money by taking out a mortgage that can later be assumed, it’s probably not advisable to obtain one just in the hopes of using it as a selling tool in the future.

Sure, the buyer may be interested in assuming your mortgage, but they may not be. If you already have an FHA loan, sweet, it may come in handy when rates rise and you decide to sell your home.

But paying costly mortgage insurance premiums on an FHA loan just for its potential assumption value is a fairly big bet to make if you can get a conventional loan for a lot cheaper.

Long story short, don’t assume someone will assume your loan, but don’t overlook it either.

previousAre Home Prices Falling? The Devil Is in the Details
nextHighlands Residential Mortgage Review: On a Mission to Become the World’s Most Respected Mortgage Brand