Why You May Want to Apply for That Mortgage Alone

Conventional wisdom tells us that two salaries are better than one, especially when it comes to qualifying for a mortgage.

Put simply, the collective income should increase what you can afford in the way of a house, meaning you might be able to make an offer on a $500,000 house, instead of settling for a property going for $300,000.

This is clearly an advantage for the prospective homeowner looking for more house, but it turns out co-borrowers are often added to mortgages unnecessarily.

Even worse, when they’re added the resulting mortgage has a higher interest rate. So to get this straight, two people had to deal with obtaining a mortgage when only one was required to gain approval, and when it was all said and done, the monthly payment was higher. Talk about frustrating.

The silver lining here is that these homeowners probably don’t realize this fact.

One in 10 Mortgage Borrowers Could Benefit by Going Solo 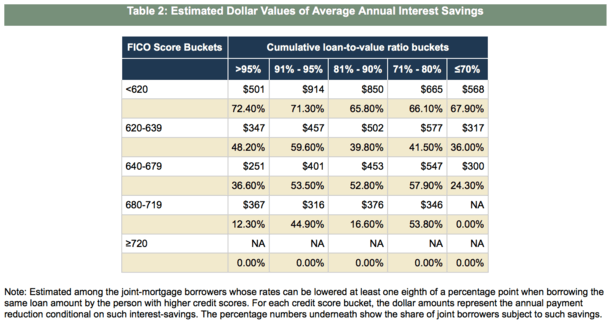 A new Federal Reserve study claims almost one in 10 prime borrowers who applied for their mortgages jointly could have lowered their mortgage rate at least an eighth of a point (0.125%) if the mortgage was applied for by just the applicant with the higher credit score, assuming their income was high enough to qualify for the mortgage.

So if a couple has mid-scores of 680 and 780, the 680 score would be used to determine the rate. When FICO scores are lower they’re subject to more pricing adjustments, which can drive the interest rate higher.

In many cases this is simply unavoidable because both borrower’s incomes are needed to qualify DTI-wise. But it turns out that out of the Fed’s sample of 603,989 joint-applicant mortgages, 248,680 with higher credit scores than their co-borrower could have qualified for the mortgage alone.

Apparently many of the couples who made this snafu were young and “less financially sophisticated” than other applicants. You can’t blame them, given the complete lack of financial education in the country, but I digress.

The Fed researchers also found that if one of the joint applicants had a credit score below 740, more than a quarter of applicants could have greatly reduced borrowing costs by simply leaving that borrower off the mortgage application.

The study also found that borrowers with high-LTV mortgages, first-time buyers, and younger borrowers were most likely to benefit from a solo (as opposed to joint) application.

Conversely, married borrowers were less likely to gain any benefit, perhaps because they tend to have similar credit.

Their study gets super wonky with basically incomprehensible charts and algebraic algorithms with funny characters, but the point is pretty clear.

If you’re considering a joint mortgage application, be sure to weigh the pros and cons, and also the pricing. You might not need both applicants to get approved, and you might even get a lower interest rate as a result.

Of course, an eighth of a percentage point isn’t a huge amount to leave on the table, but it could be if the loan amount is large, and why throw any money away if you don’t have it, especially if you’re putting more work in only to land a higher rate.

For most folks, getting a mortgage isn’t fun, so having two people apply when only one needs to may seem unduly painful.

But there are other reasons why both borrowers may want to be on the mortgage. For one, it could fortify one’s credit score, not to mention put both people on the hook for the debt. Issues can arise if only one applicant is actually liable.

At the same time, keeping someone off the mortgage could prove beneficial. I’m sure folks who walked away from their properties back in the day were happy only one person was on the loan.

previousTrulia Chief Economist: May Be Reaching Housing Plateau, Not a Bubble
nextLendingHome Declares Itself the Largest Mortgage Marketplace Lender