Are Home Buyers Worrying About the Wrong Thing?

A recent Zillow survey of housing experts found that rising mortgage rates and their impact on affordability would “be the most significant force driving the 2017 housing market.”

At the same time, the experts seemed to agree that 30-year fixed mortgage rates would need to rise to 5.65% before they actually “significantly” impacted home value growth. To be fair, some said 5% or lower could have an impact as well.

Another Zillow survey from a week ago that polled home buyers about their biggest concerns found rising mortgage rates to be a top factor, more so than saving for a down payment. In 2015, down payment beat out rates.

The 30-year fixed currently sits at around 4%, and because of its recent rise, along with rapidly appreciating home prices, mortgage payments are now the highest they’ve been since 2010.

But are rising mortgage rates really our biggest concern?

Rising Rates Don’t Impact Payments All That Much

I’ve mentioned this before because I think mortgage rates always get the headline, but down payments and other costs are often ignored, or simply not interesting enough to talk about.

Let’s look at a $200,000 loan amount at varying interest rates to illustrate.

If that rate increases a full percentage point to 5%, a level we haven’t seen since early 2010, the monthly payment increases just $118.81.

Yes, it’s ~$119 more expensive than it was at 4%, but it’s only $119. When we’re talking about a huge home purchase, $119 shouldn’t make or break you. It’s probably less than what most people pay for cable, or their wireless bill.

If you don’t have an amount well above that set aside for ancillary expenses, maintenance, upkeep, etc., you might be overextending yourself.

At 6%, the monthly payment is $244.27 more expensive than the payment at the 4% rate. But, and this is a big but, mortgage rates would have to increase a full 50% percent from current levels for that to happen.

Again, $250 is real money, but it’s not a giant sum of money when we’re talking about a major home purchase.

If we consider the national average home price of $195,300, we’re talking a $99 monthly payment increase when rates rise from 4% to 5%. That’s less than $100, even if rates reach levels not seen in seven years.

Yes, these monthly payment increases will be felt more at higher price points, with LA home buyers paying an extra $283 per month and SF buyers forking over $396 more each month. But in relative dollars (and income) it’s not as bad as it sounds.

Amazingly, many people have indicated that they would plain give up if mortgage rates increased just 1%.

My Guess Is People Can Absorb the Higher Monthly Payment, not the Higher Down Payment 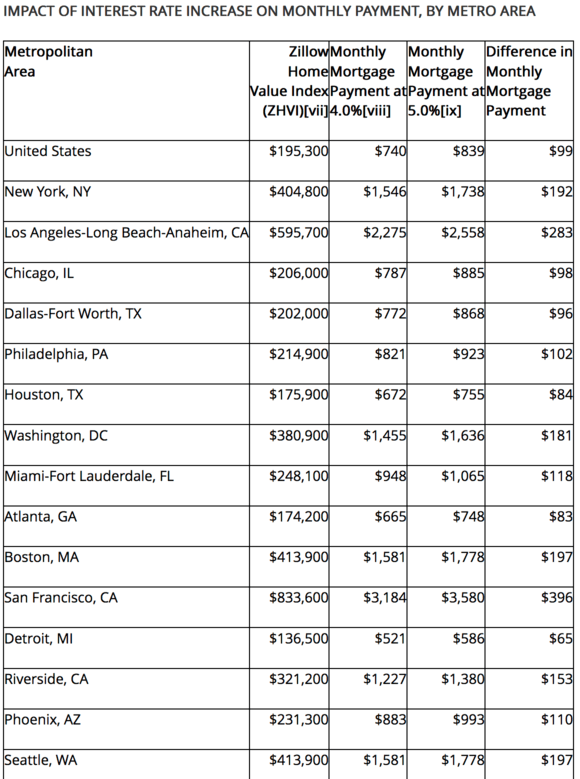 There is perhaps a more worrisome issue. That darn down payment. Oh, and property taxes and homeowners insurance, which also get more expensive with a higher home price.

Let’s focus on the down payment though. If the homeowner in our above scenario put down 20%, the purchase price would be $250,000.

If you’ve ever read a report about how much Americans set aside in savings, you’d know that coming up with an additional $10,000 (or even $5k) would be a big ask, if not an impossible one.

There’s a good chance it would force the buyer to consider a lesser down payment, and thereby get hit with mortgage insurance and/or a higher interest rate to boot. Maybe they could get a piggyback second, but they’d definitely be burdened more than if interest rates simply rose to 5%. Or even 6%.

Yes, if rates and home prices rise in tandem, which is certainly possible, it’ll hurt even more. But it seems the focus is always on interest rates. If a buyer can’t absorb another $100 to $200 a month in housing payment, you have to wonder if they should be buying the home to begin with.

previousPay Down Your Debts Before You Apply for a Mortgage to Increase Purchasing Power
nextWarren Buffett Just Listed a Home for $11 Million That He Paid $150,000 For