Are Home Prices Going Down? Nope, the Housing Market Hasn’t Topped Yet

With some recent upward pressure on mortgage rates, a lot of folks are beginning to wonder if home prices are going down? And if this is the end of the housing boom.

The thought is further compounded and perhaps supported by the fact that the housing market has been absolutely bonkers lately.

After all, property values are up something like 20% over the past 12 months, and easily at all-time highs.

Surely there has to be a respite following such impressive growth, especially if financing is now more expensive too. Right?

Unfortunately, for you prospective home buyers out there, this might be little more than wishful thinking.

Typically, you need a catalyst for a trend to reverse course. With regard to home prices, this might be a big increase in mortgage rates, a growing housing stock, or some other negative event.

In the prior housing downturn around 2008, the issue was massive oversupply. Home builders simply constructed way too many homes.

Many of these communities were built on the outskirts of metropolitan areas where nobody really wanted to live.

And while that was happening, lots of homeowners took out unsustainable mortgages that they eventually defaulted on.

Home prices didn’t just magically fall one day because they had gone up too much. There were clear drivers that preceded the decline.

You can argue that higher mortgage rates could be a catalyst, but that alone probably isn’t enough, especially when you consider how cheap they still are.

Sure, interest rates can go even higher than that, but I don’t know how much that dampens the rally.

Ultimately, there hasn’t been a clear, inverse correlation between mortgage rates and home prices. That is to say that if one goes up, the other goes down.

There have actually been times when both have risen in tandem, or both have fallen together.

This is possible if the economy is improving, which pushes interest rates up to stem inflation, while also boosting wages and generating a larger number of higher-paid home buyers.

Home Price Gains May Moderate, Especially During Fall and Winter 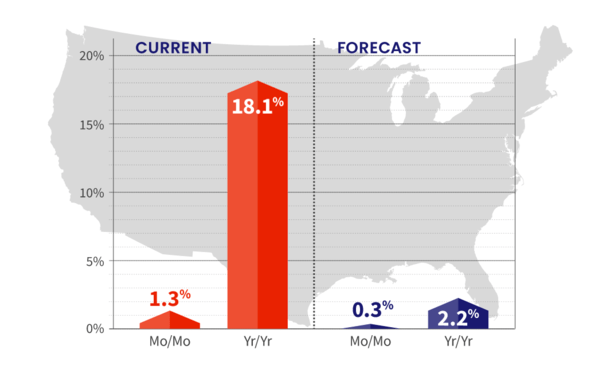 They are two very different things. For example, home prices probably won’t go up 20% in 2022.

However, they may still rise another 5-10% from 2021 levels. This means home prices are still going up, just not as much as they once were.

One also has to consider the time of year – it’s pretty common for the housing market to slow down during the colder months in fall and winter.

Simply put, fewer people are looking to purchase homes during these months, and most homeowners aren’t looking to sell either.

It probably tips more toward a buyer’s market during these months, so you might see some negative headlines regarding the housing market.

If mortgage rates also rise during this time, you could see some outright fearmongering about the housing market.

But then spring hits, the housing market gets back into gear, and all of a sudden you’ve got bidding wars again.

There could even be more pressure to buy a home next year before the low mortgage rates are really gone forever.

Where Have Home Prices Risen the Most Lately? 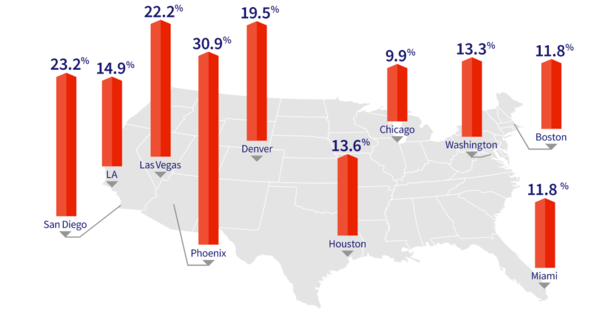 When attempting to spot a correction, you might look at where home prices have risen the most. While it isn’t necessarily sound logic, it’s something to consider nonetheless.

Leading the pack was Phoenix, which experienced an insane 30.9% increase in home prices from August 2020 to August 2021, per the CoreLogic HPI.

Just look at a Tesla or Apple or Amazon stock, which just keep going up and up while the laggards, well, lag.

These cities might just even more expensive until eventually hitting a wall at some point.

As an example, San Diego home prices are expected to increase an additional seven percent over the next 12 months.

What Housing Markets Are Most at Risk of Falling Home Prices? 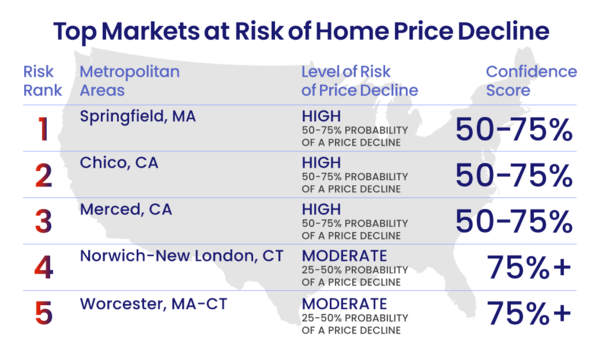 Again, similar to the stock market, the big brands seem to weather storms better than the mid-market players.

So even during a crisis, they’ve got a buffer that keeps them somewhat insulated. As such, the top five metros most at risk of a home price decline aren’t on CoreLogic’s top gainers list.

The CoreLogic Market Risk Indicator (MRI) provides a monthly update of the overall health of housing markets across the nation.

It currently predicts the metros of Springfield, Massachusetts, Chico, California, and Merced, California to be at a high risk (50-70% probability) of a home price decline over the next 12 months.

Meanwhile, Norwich-New London, Connecticut and Worcester, Massachusetts are at a moderate risk (25-50% probability) of a price decline during that time.

Ultimately, there isn’t strong evidence of widespread home price declines at the moment, only moderating home price gains in most parts of the country.

Keep an Eye on Housing Supply and Mortgage Quality

If you want to determine when the next housing market crash will take place, it might be wiser to keep an eye on housing supply, along with mortgage quality.

For me, these two things can have the greatest impact on the direction of the housing market.

The supply/demand thing is pretty basic. When you have too much of something, prices generally need to go down.

We’ve had too little of something for a while now, which explains why home prices have surged in the past decade. When that changes, expect home prices to drop.

The other piece is mortgage loan quality. Today’s home loans are pretty darn boring. Just about everyone has a 30-year fixed or 15-year fixed mortgage.

They’ve also got ridiculously low mortgage rates on these super boring loans. And they were underwritten using real income, asset, and employment documentation.

If and when that changes, I’ll start getting nervous. But so far, the credit box remains pretty tight.

Even if it were to loosen, the competitive housing market makes it difficult for the lesser-qualified borrowers to win a bidding war.

This has created a rather pristine batch of mortgages, unlike the ones we saw in 2006, a year or two before the wheels came off.