Are We Already Running Out of Homes?

Sometimes it seems like there’s no middle ground. In California, it tends to go from summer to winter overnight.

We’re talking A/C pumping all day to whipping out extra blankets that same evening. Fortunately, we don’t really have a winter, just some semi-brisk nights.

And it looks as if the housing market hasn’t been much different as of late. You blink and you miss your opportunity.

At least, that’s what the latest round of news tells us, whether true or not.

Two telling reports were released this week that sound great for housing, assuming you already own one, or more specifically, bought one recently at or around the “bottom.”

It wasn’t long ago that housing was looked at as a losing endeavor, but seemingly overnight it has become the hottest investment on planet earth. Well, not in Spain.

In fact, I’m getting a lot of “this is the best time EVER to buy a home” from friends of mine that never uttered a word about housing in the past, let alone anything to do with money or investing.

Perhaps they might be on to something. And every other person I know is either looking for a home or in contract to buy a home, assuming they’re not stuck with an underwater one.

Unfortunately, once the “secret” is out, it’s usually too late.

Buy When No One Else Is 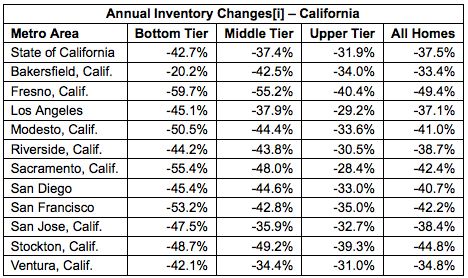 The best time to buy a house is when nobody else is. Unfortunately, that time has come and gone.

Just look at a new report from Zillow, which noted that “massive inventory shrinkage” (bad choice of words) has hit the nation.

The change in inventory is measured by looking at the difference in the number of homes listed for sale on Zillow across the country from Sept. 30, 2011 to Sept. 30, 2012.

The drop is even more pronounced in the large metros that were hard-hit by the mortgage crisis.

In Los Angeles, housing inventory is down 37.1%, meaning it’s that much harder to find a property to buy if you haven’t already purchased one.

The largest inventory drop in California was seen in Fresno, where listings have just about been cut in half (-49.4%).

Investors Are Taking All the Good Stuff

Unfortunately, it’s not first-time homebuyers that are getting in on the action, according to Zillow.

Instead, it is savvy investors who are scooping up the homes before first-timers even get a chance to make an offer, mainly because they can pay in cash and close in days, not months.

Yes, it’s take a long, long time to get a mortgage these days, so dealing in cash is much more practical.

These investors then either list the properties as rentals to former homeowners who were foreclosed on, or simply flip them and turn a quick profit.

The newbies might wind up with the homes eventually, but at a premium because they’ve changed hands twice.

It’s almost like it was during the lead up to the housing crisis, with the developers and flippers making money again.

The difference this time around is the lack of loose financing, and perhaps even underwriting guidelines that are too tight, ironically making it more difficult for everyday Joes to compete.

The result is not a healthier housing market, but one ruled by even more investors than before.

By the way, Zillow has a new report coming out titled, “California’s Housing Market: Navigating the Post-Bottom Landscape.”

So clearly they believe the worst is behind us. I tend to agree, though there will always be ups and downs along the way. And some regions of the country will recover faster than others for reasons unique to those areas. 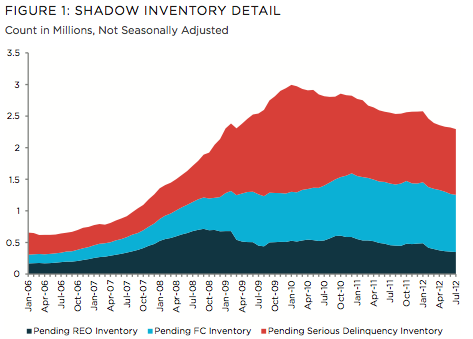 Meanwhile, over at CoreLogic, the so-called shadow inventory has continued to drift lower.

The shadow inventory refers to properties not listed openly on the market, but most likely on their way to being for sale because the owners are either seriously delinquent, in the process of foreclosure, or held by banks but not yet listed on the MLS.

As of July 2012, there were only 2.3 million such units, down 10.2% from a year earlier, thanks to an increase in short sales and other loss mitigation efforts.

The company noted that the decline in shadow inventory foreshadows (no pun intended, just a lack of another word) a rise in home prices, which again, is good news for those who already purchased a home.

But somewhat bad news for those still looking to buy a property, as it probably feels like every week brings with it an unwelcome uptick in home prices.

There’s also the sense that sidelined sellers are probably on the rise. After all, why list your home now if you can list it in a few months and sell at a much higher price?

The sliver of good news is that mortgage interest rates are very low historically, which makes it a great time to take out a fixed-rate home loan for a long, long time.