There’s been a lot of talk lately about a shift from seller’s market to buyer’s market, what with home price gains beginning to moderate somewhat and mortgage interest rates on the rise.

But it seems this has been more speculation than reality, with home price gains still quite high and pricing relief for would-be home buyers nowhere in sight.

Home Prices Increased More Than 6% from a Year Ago 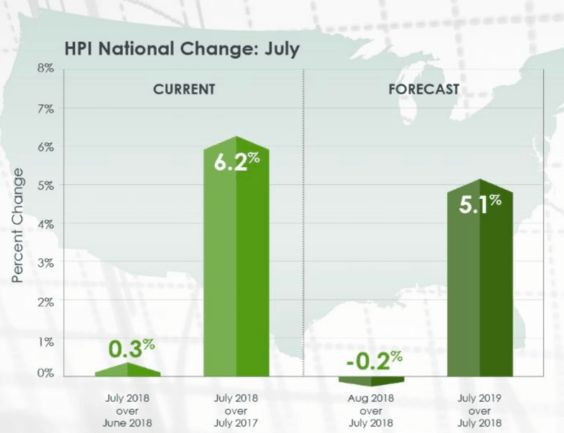 The overall Home Price Index (HPI) has increased on a YoY basis every month since February 2012 and has risen a whopping 57% since bottoming out in March 2011.

The thought that we’re at new all-time highs nominally is enough to give pause, though when you factor in the 12 years that have zipped by, it’s unfair to look at things through that lens.

In other words, things aren’t as expensive as they seem, even if they feel pretty darn expensive.

But Now Home Price Gains Are Beginning to Moderate

As we inch closer to new, all-time high real home price values, the gains seem to be slowing. This makes sense because fewer people can afford to buy at such lofty levels.

This explains why the CoreLogic HPI Forecast indicates only a 5.1% year-over-year gain in home prices from July 2018 to July 2019.

While lower than this year, it’s still over 5% higher than current prices. That means the $500,000 house you think is too expensive today might be closer to $525,000 next year.

Factor in a potentially higher mortgage rate and it’s an even bigger hit to your wallet. And no, home prices don’t go down just because mortgage rates go up.

Both can rise in tandem and pack a one-two punch.

Existing Homeowners Are Happy to Bide Their Time 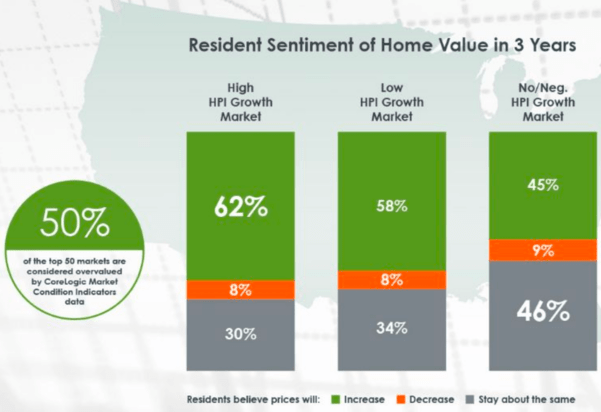 So we know home prices are still forecast to rise quite a bit, despite already impressive gains. Now here’s the problem if you’re looking to buy a house.

Home sellers are apparently all too aware that home prices can and probably will continue to rise, putting them in no rush to list their properties.

As you probably know, housing inventory is already severely limited, and this sentiment just makes it worse for prospective buyers.

It doesn’t seem to matter that the July CoreLogic Market Condition Indicators (MCI) data revealed that half of the top 50 real estate markets were considered overvalued.

If most existing owners believe their properties are going to appreciate further in the very near future, they’ll have little motivation to list them today.

And because inventory is one of the main drivers of home price gains of late, this just means higher prices, whether it’s fundamentally correct or not.

Sure, at some point something will have to give, but if you’re waiting for a real estate sale, you might want to reassess.

As I said in a post last month, it can be a mistake to call the housing top too early. And even then, home prices may go sideways after that. If interest rates rise during that time, it’ll still wind up more expensive.

Experts See Buyer’s Market in 2020 or Beyond 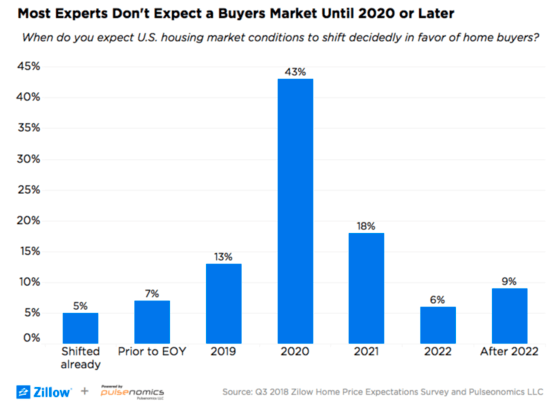 Further hammering this one home is a report from Zillow that claims 76% of housing experts don’t see a shift to a buyer’s market until 2020 or later.

This was gleaned from the Q3 Zillow Home Price Expectations Survey conducted by Pulsenomics LLC that involved more than 100 real estate economists known as “experts.”

As you can see from the chart above, nearly half believe we’ll have a buyer’s market in 2020, while about a fifth see the transition happening a year later in 2021.

Another 15% don’t see a buyer’s market until 2022 or later, which tells you this housing market might have quite a bit of fuel left in the tank yet.