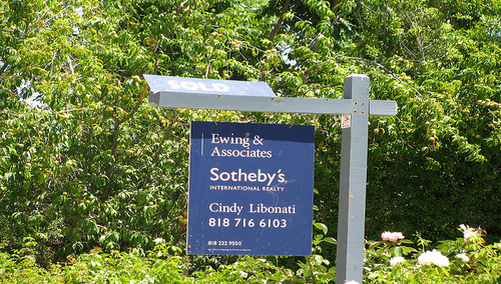 “Home sales in California continue to be considerably stronger than the nationwide sales figures,” said C.A.R. President James Liptak, in a release.

“The market will continue to register large, but diminishing year-to-year percentage gains in the coming months, as current sales are compared against the extremely low numbers that prevailed during the early months of the credit crunch.”

The sales pace rose to a seasonally adjusted rate of 620,410 units on an annualized basis, a slight pullback from January, with activity dominated by distressed sales, which would explain the huge decline in median price paid.

“This can be attributed to the under $500,000 portion of the market, which has experienced larger price declines than the other market segments due to the large share of distressed homes for sale. This further contributed to the decline in the statewide median.”

I suppose the good news is that CAR’s Unsold Inventory Index for existing, single-family homes fell to just 6.5 months, compared with 15.3 months for the same period a year ago, so a good chunk of the overhang is gone.

Unfortunately, all the new distressed properties coming onto the market will continue to work against this, especially those postponed by various moratoria, which likely have no other fate but foreclosure.