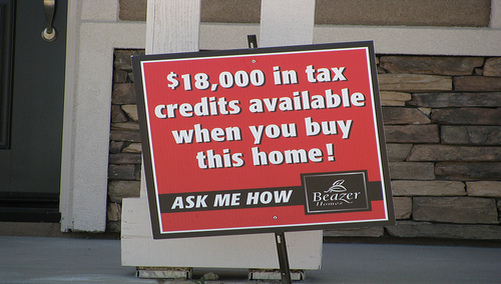 A tax credit intended to spark sales of brand new homes in the Golden State looks to be running out, according to the California Franchise Tax Board.

Earlier this year, the state set aside $100 million for qualified homebuyers who purchased a property between March 1, 2009 and March 1, 2010, assuming the home was never resided in, used as a primary residence, and lived in for at least two years.

This first-come, first-served tax credit allows qualified buyers to receive the lesser of five percent of the home purchase price or ten thousand dollars, with the credit applied in equal amounts over the three successive taxable years beginning with the taxable year in which the purchase of the property is made.

The tax credit is in addition to the first time homebuyer tax credit that offers up to $8,000, meaning qualified buyers in the state could receive up to $18,000 in rebates for a new home purchase.

Unfortunately, strong demand has ripped through most of the $100 million fund, with more than $88 million claimed through June 10, including $30 million in the last month alone.

“As shown in the numbers below, we will soon reach $100 million in new home credit applications,” the Tax Board said on its website.

“Because many of these are duplicates, revised, or invalid, we plan to receive 12,000 applications. This will ensure we have more than enough valid applications to allocate the full $100 million. These additional applications will be subject to the availability of remaining credits.”

Through June 10, 9,145 applications have been received, with about 3,000 coming in the last month, so time is clearly running out.

New homebuilders may suffer as a result, especially now that mortgage rates have skyrocketed, but some have argued that the emergence of the tax credit motivated builders to add new homes at a time when inventory was already swelling.