Before you rush out to buy a home, consider the fact that inventory levels are beyond dismal at the moment, though there’s a good chance that could all change rather quickly.

If you’ve already begun your property search, you probably already know inventory is virtually non-existent in your desired neighborhood. If you haven’t, prepare to be shocked.

There’s even concern that the shortage of inventory could be further exacerbated by the recent surge in mortgage rates, as would-be buyers jump off the fence and rush to buy before affordability gets any worse.

But I don’t believe things will go that way – in fact, I think it’s going to be quite the opposite.

And there are already signs that housing inventory is rising. A recent report from Redfin revealed that active listings increased 6.4% between March and April, and 4.2% between April and May.

Compare that to last year, when inventory peaked in January and drifted lower much of the year.

Assuming more homes keep hitting the market, year-over-year levels of inventory may actually be positive at some point this year.

So why is inventory slated to rise? Well, allow me to highlight five reasons:

Homeowners Gaining Equity and Getting Out 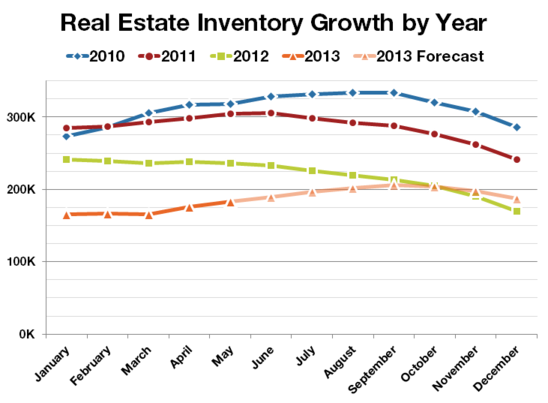 Here’s an oldie but goodie. As home prices continue to increase, more and more homeowners will get back in the black.

We all know scores of homeowners are stuck with underwater mortgages, but many of those who held on are now finding themselves with some sliver of home equity thanks to recent hefty home price gains.

Additionally, a lot of the mortgages on these properties were taken out in 2005-2006 or earlier, so for those who didn’t go with an interest-only loan, a decent chunk of the mortgage is already paid off.

As time goes on, this trend should become even more prevalent, and many of these homeowners just want out. They aren’t necessarily looking to turn a profit; they just want to avoid a short sale or foreclosure.

Sure, some will argue that they’ll need “X” amount of home equity so they can purchase another home after they sell, but plenty of owners may decide to downsize, or simply rent instead.

Not everyone is so bullish on housing, and with interest rates rising, existing homeowners know today is a great time to sell, especially with bidding wars forcing prices up to future levels.

After all, it will be a lot easier to sell at a premium now, and with far less scrutiny, when inventory is still low. 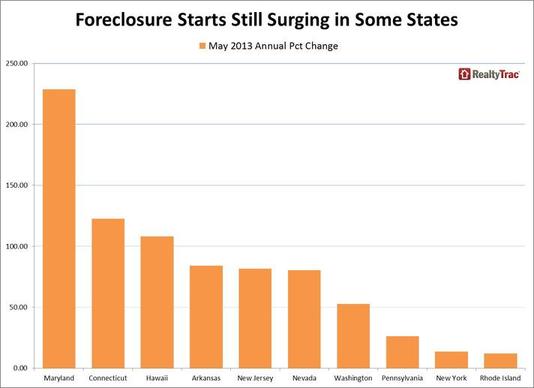 Another interesting trend of late is the rise in foreclosure activity, which was steadily falling up until last month, according to RealtyTrac.

After hitting a six-year low in April, foreclosure activity increased two percent in May, thanks to an 11% rise in bank repossessions.

Foreclosure starts increased four percent from April, and rose substantially in judicial states, where the process takes a lot longer.

Still, it looks like lenders are beginning to cut through the red tape, with foreclosure starts up 229% in Maryland, 122% in Connecticut, 108% in Hawaii, 84% in Arkansas, and 82% in New Jersey from a month earlier.

The takeaway here is that as home prices rise, banks and lenders will actively pursue foreclosure because they know the demand is finally there to offload the properties.

Banks Will Take Advantage of Rising Prices Too

This has been a concern for years, with many pondering when the banks will dump their massive distressed inventory, which continues to grow.

Though they’ve held on for quite a while, it could soon be time for them to ditch their stable of homes and get back to what they do best, banking.

And they could begin to do it a lot more quickly, seeing that home prices have chalked some massive gains of late, especially if the housing rally doesn’t have the legs many think it does.

Banks aren’t typically in the business of acquiring and selling residential real estate, so if they can get out at a decent price, they probably will.

Unfortunately, if they all get the same idea at once, it could spell disaster for the recent home price gains.

At the same time, many of those who purchased properties on the cheap lately were Wall St. investors and hedge funds, such as Blackstone and Colony American Homes.

As home prices rise, they will probably do two things that will hurt the residential real estate market.

For one, they will stop buying houses, seeing that they’re in it strictly to make a certain return in a relatively short period of time.

If the price point isn’t there anymore, they’ll stop buying, point blank. At the same time, they’ll begin dumping their properties for tidy profits to mom and pops that missed the housing bottom.

This could get nasty, seeing that these hedge funds purchased a ton of single-family homes over the past few years.

And we all know how Wall Street works – pump and dump, with no concern for collateral damage.

Home Builders Getting Back to Work 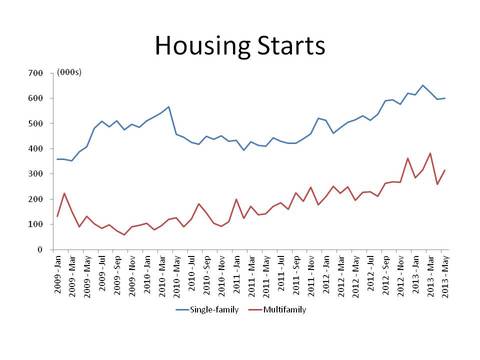 While existing housing inventory increases, so too will the number of new homes built.

Yesterday, the Census Bureau revealed that single-family permits increased 1.3% to 622,000 units in May, the highest level in five years.

At the same time, builder confidence for newly-built single-family homes surged eight points to a reading of 52 on the National Association of Home Builders/Wells Fargo Housing Market Index (HMI), the first time it has been over 50 since April 2006.

NAHB Chief Economist David Crowe said the report is in line with expectations for a 29% increase in total housing starts this year, which will see them top the one million mark for the first time since 2007.

In other words, home builders are gaining confidence and getting back to work. New developments will be sprouting up all over the place as demand for homes continues to increase.

Of course, it’s just a matter of time before they build too many homes and repeat history once again. But hopefully that’s a long way out.

By the way, mortgage rates are only expected to rise about a half a percentage point or so between now and the end of 2014, so why fight tooth and nail for a home today, especially with future home price gains already baked in?

Patience may be the play here if you want to land a property you actually like.

previousBlogger Claims Bernanke Made His Mortgage $53,000 More Expensive
nextCheck Out How Much Wells Fargo Raised Mortgage Rates This Week