Well, 2012 is now in the rear-view mirror, and looking back, it was a good year for housing, if the numerous recent research reports are any indication.

In 2012, home values increased in all four quarters thanks to relatively low asking prices and limited inventory.

The biggest gains were seen in the hardest-hit areas, including Phoenix, AZ, where prices jumped a staggering 22.5% last year.

They’re expected to climb another 8.5% this year, though one should keep in mind that they fell 56.2% from peak to trough.

The Las Vegas and Miami metros have also been winners over the past few years, though they too experienced nasty home price drops post-crisis. 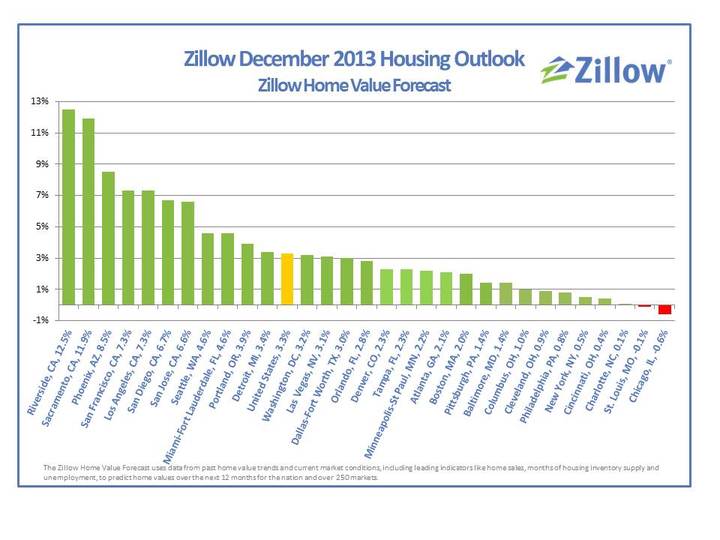 The bottom five include Chicago, where home prices are expected to drop 0.6%, and St. Louis, where prices are slated to dip by a meager 0.1%.

So as always, the outlook is local and regional, though home prices are still expected to rise in most areas nationwide.

The preliminary annual count was 4.65 million sales, up from 4.26 million a year earlier.

It was the highest annual total since 2007, and also the biggest year-over-year increase since 2004.

Meanwhile, inventory is still rock bottom. As of the end of December, total inventory fell 8.5% to 1.82 million existing homes available for sale, a 4.4-month supply at the current sales pace.

That’s down from 4.8 months in November, and represents the lowest housing supply since May 2005, which was close to the apex of the housing boom.

Unfortunately, the near-six percent appreciation rate was much higher than the “healthy” norm, representing the largest annual increase since 2006, when the market was on the cusp of going bust, per Zillow.

The company noted that the historic standard for home price gains is around three percent annually. So are we repeating history again?

Not so fast. Sure, home prices have increased quite a bit, but they’re still nowhere near where they were in 2006 – 2007.

And home price appreciation is expected to temper quite a bit this year, falling back in line with the historic average, with a 3.3% increase anticipated in 2013.

But thanks to recent home price gains, a lot more inventory has essentially been “created.”

I’m talking about the many underwater homeowners who were essentially trapped in their homes.

At the same time, short sales are expected to be quicker and more commonplace, so there should be plenty of housing inventory.

Yes, it means home prices won’t continue to surge, but it also means healthier growth, not just another short-term bubble.

And with today’s mortgages of much better quality than their pre-crisis brethren, it bodes very well for the future of housing.