To say 2013 has been a good year for real estate would be an understatement. A huge one…

Over the past 12 months, home prices have risen by double digits throughout much of the nation and most who listed their home during that time were met with a bidding war.

And often times these bidders were so motivated to buy that the sales price would far exceed the list price.

It’s as if today’s home buyer is willing to pay future prices just to get in, whether that’s because mortgage rates are super cheap, or simply a return of the bubble mentality. 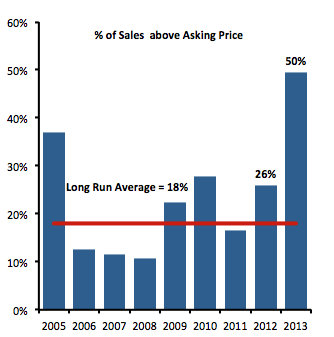 In California, 49.5% of homes sold so far in 2013 went above asking price, which is nearly double the share seen in 2012 (25.9%), according to the 2013 Annual Housing Market Survey released by the California Association of Realtors.

If you go back to 2011, the share of homes sold above list was just 16.6%. In other words, housing took off from its bottom fast, and never looked back.

For the record, the long-term average share of homes sold above list has been 18% (over the past 20 years). So yes, real estate is hot in the Golden State and elsewhere.

In fact, some sizzling markets like Dallas and Denver are at new all-time highs. Who would have thought that just a year or two ago?

The scary part is the chart above shows a huge drop-off after such a stellar year, which makes me wonder if 2014 and beyond will be flat or even negative in some markets.

While there are stories of epic battles that pushed prices up more than $100,000, most homes that did sell above list in California this year only went for about 5% more. 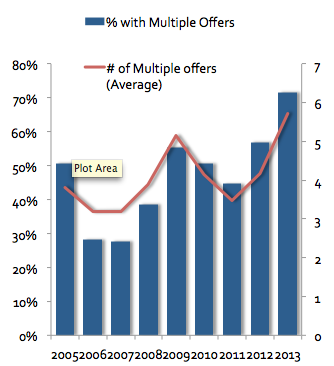 The reason so many homes went for more than their asking price was because more than seven out of 10 received multiple offers.

And the reason most had multiple bids was due to a shortage of inventory, which continues to be an issue in desirable markets nationwide.

[Homeowners Are Waiting for Prices to Rise Before Listing Their Properties]

In 2012, only 57% of homes received multiple offers. At that time, prospective buyers still weren’t quite sure we had hit the bottom.

CAR noted that the share of homes receiving multiple bids was the highest in at least 15 years.

Breaking it down further, REOs and short sales saw the most competition, with 91% and 75% receiving more than one offer, respectively. 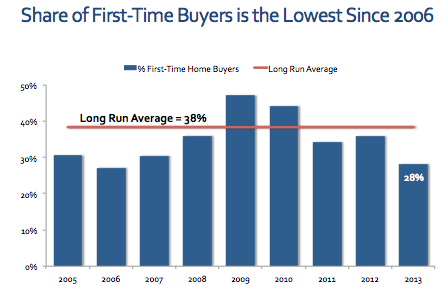 While home sales are up, it’s not first-time home buyers or everyday Joes acquiring their dream homes.

Rather, it’s investors and overseas buyers snagging properties on the cheap and renting them out.

Per the survey, 19% of home sales went to investors in 2013, up from 16% last year and nearly triple the rate seen a decade ago.

Meanwhile, overseas buyers scooped up eight percent of all sales, up from 5.8% in 2012 and the third successive increase.

Sure, some plan to live in the homes, but nearly one-third plan to rent them out.

Overall, cash buyers (typically investors) accounted for more than a quarter of home sales in California, down slightly from a year ago, but triple the rate seen in 2001 and well above the 15.1% average seen since 1998.

So the composition of the housing market is changing quite a bit, despite the seemingly positive news. Investors are squeezing out traditional buyers, which will likely create a unique environment in coming years.