Last year was a good year for real estate. Just about everyone knows that.

The company noted that home prices rose for the 21st consecutive month on a year-over-year basis, though the increase was a paltry 0.1% from October to November.

And CoreLogic believes home prices will dip from November to December of 2013, pushing the year-over-year figure to 11.5%.

Despite this massive annual gain, home prices remain 17.6% below their April 2006 peak, so there’s still plenty of upside if you believe we’ll eventually equal and surpass former levels. 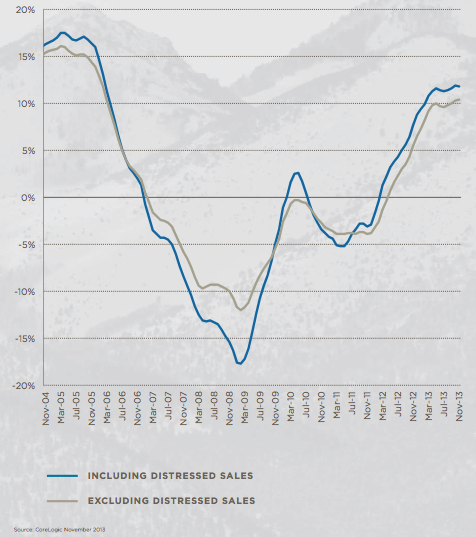 With home prices, you’ve always got to go local. The state-level probably isn’t even fine-tuned enough, but it’s a start.

Including these winners, a total of 21 states and the District of Columbia are now at or within 10% of their all-time highs.

Not too shabby considering no one wanted to touch real estate with a 10-foot pole a couple years ago.

So depending upon where you live, real estate could be fully recovered, or still far from it, which could dictate further price movement.

For the record, every other state not included in this list peaked between 2005 and 2007, when the market began to overheat.

Nevada Chalked the Most Gains in 2013, Yet Remains Furthest From Peak

Five states knocked the cover off the ball in 2013. They include some of the hardest-hit states, most notably Nevada.

Here are the top five gainers in terms of year-over-year home price appreciation through November:

*Arkansas was the only state to register a year-over-year decline through November, with home prices down 1.1% in the Natural State (had to look up that nickname).

But Nevada also topped the list of states furthest from their peak values in November as well:

From these two lists, it would appear that Florida could be the most likely to bounce back big in 2014. Prices are still down nearly 40% from their peak and only increased 12% year-over-year through November.

Nevada and Arizona are also well off their peaks, but seeing that they’ve appreciated so much over the past couple years, a correction or price easing might be in order.

These numbers certainly point to an uneven recovery. In states where home prices never did all that much, like the Dakotas and Wyoming, they’re at new highs.

In states where things got out of hand, prices have yet to recover. But history tells us they probably will, eventually…and reach even higher highs.

Read more: 10 Predictions for Mortgage and Housing in 2014