Should we worry? Home sellers are hitting it out of the park, a potentially ominous sign we’ve gotten a little too house happy again, this according to a new report from RealtyTrac.

The company’s data revealed that U.S. home sellers chalked an average gain of 17% in March, the highest of any month since December 2007.

Back then, home prices were quite lofty and it wasn’t long before the market nosedived. Yes, things are a lot different this time around, thanks mainly to a cleaner stable of mortgages, but it’s still somewhat worrisome.

I don’t think this housing rally is over yet, but we might be getting closer to the end of the positive portion of the current cycle. 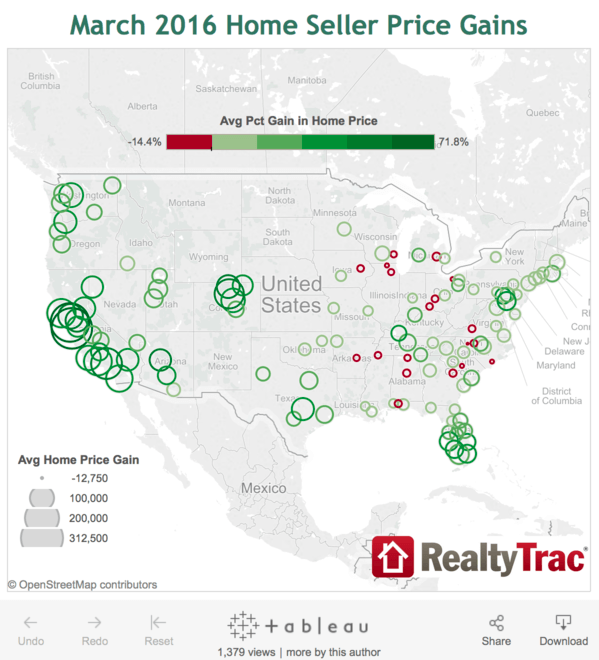 RealtyTrac senior vice president Daren Blomquist said home sellers in many parts of the country are seeing average gains “close to or above” those experienced in the prior boom.

And the median sales price has reached a new all-time high in 36% of markets nationwide, including Boulder, Denver, Portland, Fort Collins, Austin, Greeley, and Cincinnati. Four of those markets are in the state of Colorado.

Nationwide, the median sales price was $210,000 in March, a nine percent increase from February and an 11% rise from a year earlier. March was also the 49th consecutive month of year-over-year home price increases. I’m guessing we’ll hit 50 next month…

After all, we are still eight percent below the $228,000 peak seen in July 2005, and chances are we’ll pass that and then some. Factor in inflation and maybe home prices aren’t as high as they appear.

It’s Not All Rosy

Despite an overall uptrend in much of the nation, some 17% of housing markets from coast to coast actually lost value in the past 12 months.

In San Francisco, a 47-month winning streak has been broken, and in Pittsburgh a 21-month streak has come to an end. You can blame affordability concerns for that, along with an increase in distressed sales.

Sellers were cutting their losses in another 15% of housing markets, with Rockford, Illinois (11% average loss relative to purchase price) the leader in that department. Interestingly, homeowners there have seen some of the biggest gains in the nation over the past year. But sellers still decided to move on.

Smaller losses were seen in bigger metros such as Milwaukee, Chicago, Cincinnati, Birmingham, and Flint.

Those who sold last month had owned their properties for an average of 7.67 years, up four percent from the 7.37-year average seen a year earlier.

Remember, most folks don’t hold onto their homes very long so you can make an argument for a 7/1 ARM instead of a fixed product. Of course, everyone always thinks they’ll stay longer.

Where We’re At Now

It appears as if a lot of homeowners are happy to either break even or sell for a small loss after so many years of being underwater on the mortgage.

There are probably lots of investors cashing out as well after holding for just a few years. And of course we’ve got the flippers buying, renovating, and cashing in.

But I don’t think we’re at another market peak just yet. Yes, there are affordability concerns and hearing about new all-time highs gives me shivers down my spine.

Just because we’re hitting new highs doesn’t mean prices can’t go any higher. And as mentioned, you have to factor in inflation to the numbers. If they’re adjusted for inflation they’re still far off the real all-time highs.

Of course, you could argue that the previous all-time highs were absurd, driven by crappy mortgages, and completely unsustainable.

So where does that leave us? Well, my personal opinion is that with rents so high and unattractive, and many would-be homeowners still getting back on their feet (and Millennials beginning to believe in housing again), we’ve got more home price growth to come.

But like rates, there will come a time soon when things finally shift. Even if home prices do kind of plateau, as some have said, buying is still a better deal than renting in many areas of the country. That tells me there’s more upside for a while, though as the data shows, it will vary widely by market.

previousShould You Buy a Home Where the FHA Loan Share Is High?
nextCan We Use These Charts to Predict the Next Housing Crisis?