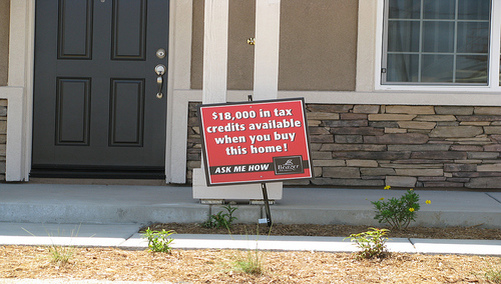 The first-time homebuyer tax credit played a major role in boosting home sales in the Golden State last month, according to the California Association of Realtors.

Last month, existing, single-family home sales increase 12 percent to a seasonally adjusted annualized rate of 553,910 from July 2008; they were up 8.1 percent from June.

“Because the tax credit has helped so many first-time buyers become homeowners, it is critical that Congress extends the credit beyond the Dec. 1 deadline, and includes all buyers, not just first-timers.

Meanwhile, the median price of an existing single-family home increased 3.9 percent from June to $285,480, though prices were still off 19.6 percent from a year earlier.

“This was the largest increase on record for the month of July based on statistics dating back to 1979. The yearly decline in July also was the smallest in the past 19 months.”

Interestingly, homes priced below $500,000 now account for 74 percent of total sales, up from 43 percent prior to the beginning of the mortgage crisis.

Unfortunately, prices really haven’t fallen by much in desirable areas, it’s just that low-end and distressed properties are the only things selling; and affordability is only up because of government intervention.

Inventory slipped to 3.9 months in July, down from 6.9 months a year earlier, though it can deceiving with all the foreclosures not on the market, otherwise known as shadow inventory.