While it’s been a rough couple of weeks in terms of mortgage rates and the wider economy (stock market rout), consumers have never been more amped on the housing market, this according to Fannie Mae.

The company’s Home Purchase Sentiment Index (HPSI) increased to a new all-time survey high in January, thanks to positive changes in five of the six components that make up the index.

For the record, the HPSI reflects consumers’ current and forward-looking expectations of the housing market and dates back to 2010. So it’s not the oldest survey in the world, but it provides some context relative to recent years. 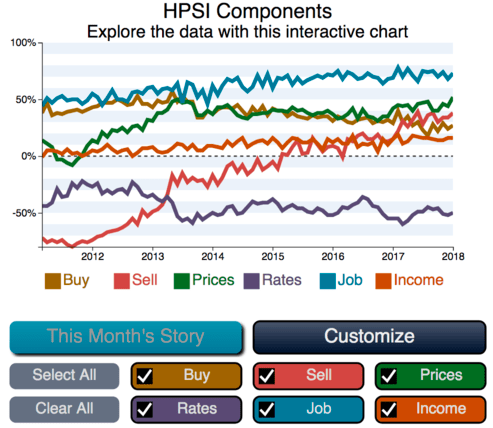 It may seem surprising that the HPSI is higher than it has ever been, despite home prices peaking in many metros nationwide and mortgage rates climbing to levels not seen in several years.

But that’s the funny thing about how the economy works, and to the same degree the housing market.

While there will always be bears who think home prices have topped and are due to crash, they often jump the gun. The same is true about the overly bullish pundits who think the best is yet to come.

Regardless of what either side thinks, one thing always seems to ring true; things play out over a much longer period than we think, whether it’s the bumpy ride down, or the wonderful, joyous journey up.

In reality, home prices didn’t find a real bottom until around 2012/2013 nationwide. And in some areas, they’re still struggling.

Later, we were told that home prices would peak in 2016 and do very little through 2022. As you probably know, home prices have been rising every month for around six years now.

The point is it’s very difficult to make a guess as to when the housing market will peak and when it will bottom, much like anything else including the stock market or mortgage rates.

We had been hearing that 30-year mortgage rates were going to go to 5% for years now, only for them to defy gravity year after year. While that seems to be happening now, finally, it’s still not a sure thing.

The 2018 mortgage rate forecast still calls for really low rates throughout the year.

The takeaway is that whatever the forecast, it usually gets ahead of itself. This is good news if you’re worried about the housing market peaking again, and may explain why consumers are still really bullish, despite a seemingly less favorable situation.

The Housing Market Is Driven by the Economy

If you’re wondering whether to rent or buy a house in 2018, it should be noted that a slight majority of housing markets still favor owning.

But that’s slipping each and every month, and will certainly take a hit once the higher mortgage rates (if they hold) are baked into the equation.

However, there is still positive (and even rising) sentiment about home buying due to other factors like job security and/or income expectations.

For example, the Fannie Mae survey found that 73% of Americans aren’t concerned about losing their jobs, up from 68% a month earlier.

Additionally, 52% of respondents said they expected home prices to go up in the next 12 months, up from 44% a month earlier. That’s a new survey high, despite home prices supposedly hitting their apex in markets nationwide after 60+ consecutive months of gains.

And perhaps the silver lining regarding higher mortgage rates is that more respondents felt they would now fall over the next 12 months.

As for the other questions, 27% indicated it was a good time to buy a home, up from 24% a month earlier, and well off the low of 18% back in August.

And selling a home is at an all-time high with a 65% share, which is unsurprising given the massive gains existing owners have realized over the past several years.

In summary, while things have been hot for a long time, they aren’t necessarily going to fizzle overnight.

Lastly, as for that next housing crash, it might take longer than you think. In fact, it could happen in 2024 or beyond.