There have been widespread reports and warnings that Hurricane Sandy will dampen the ongoing housing recovery at a time when things are already rather tenuous.

Bloomberg noted that one of every five U.S. home sales is located in the areas affected by the storm, which extends from Virginia to Massachusetts and beyond.

Things have been so bad that real estate agents have reportedly had to pull down their for sale signs to avoid seeing them turn into dangerous projectiles.

As a result, home sales are going to come to a standstill in the expansive area.

Additionally, some transactions will probably fall through entirely as a result of the storm if the damage is severe enough, even pending refinances if lenders aren’t willing to take out a loan on a newly-damaged property.

The Mortgage Bankers Association president David Stevens also warned that home sales and mortgage applications will be lower as a result of the storm.

And loans in process will likely be “frozen” until home inspectors can get out to the properties to assess the damages.

This means properties that were already inspected and appraised will likely need to be given another look.

I can only imagine the havoc as lenders try to deal with mortgage locks, extensions and other deadlines with the bond markets closed.

Meanwhile, analytics firm CoreLogic has estimated that roughly 284,000 properties are at risk of damage from Hurricane Sandy.

And the value of those properties is a staggering $88 billion, so you better believe there will be a meaningful impact. Insurance companies are also going to be hit hard.

As you can see from this chart, New York residents are expected to see the most damages, followed by New Jersey then Virginia. 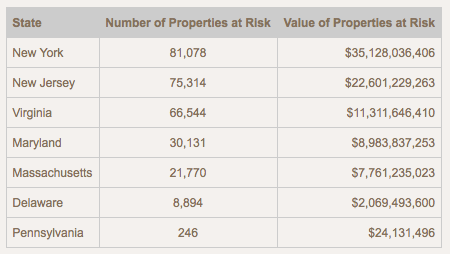 The company said its “full menu of relief policies” is being extended to borrowers (with Freddie Mac owned or guaranteed mortgages) whose homes have been damaged or destroyed by the merciless Sandy.

Freddie Mac has authorized the nation’s largest loan servicers to provide the following forms of relief:

Eligible homeowners include those located in jurisdictions that President Obama has declared to be “Major Disaster Areas” and where he has made Individual Assistance programs available.

If you believe you’re affected and need more information, you can contact your own loan servicer and/or Freddie Mac at 800-FREDDIE.

Keep in mind that loan servicers have been instructed to offer help to borrowers on a case-by-case basis, so you will need to prove your point.

I expect sister company Fannie Mae will more than likely offer the same type of relief, though the company has not yet sent along a press release.

It’s also likely that individual lenders will offer relief to those affected by Sandy, so be sure to inquire with your lender if you need assistance. Most banks have already waived fees and offered up payment options for mortgages and home equity lines of credit.