If You Don’t Want to Work Forever, Pay Off Your Mortgage

Conventional wisdom says to pay off the mortgage in its entirety before you retire. That way you won’t have to worry about sizable housing costs when living on a fixed income.

Lately, this age old rule has been challenged by a lot of folks because mortgage rates are at unprecedented low levels (or were).

Heck, they still are super low, which makes the argument stronger to hold onto the mortgage longer, especially seeing that mortgage interest is tax deductible.

But new research from the Center for Retirement Research at Boston College reveals that those with debt are more likely to continue working well into old age.

In fact, their working paper revealed nearly half of those in their 60s with debt continued to go to work, compared to just a third of those with no debt.

And mortgages seem to be the major culprit, seeing that the debt is often much larger on home loans than credit cards or other loans. 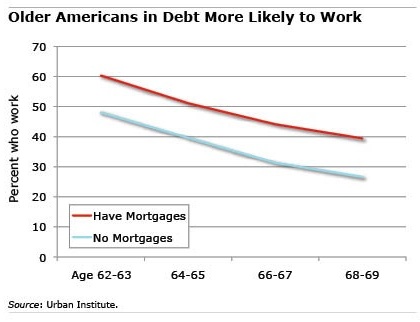 The researchers, Barbara Butrica and Nadia Karamcheva of the Urban Institute, found that at age 64, more than two-thirds of homeowners with mortgages still had to huff it to work.

Meanwhile, just over half of those who had paid off their mortgage still went to work each day.

So it’s clear that those who tackle the mortgage before they hit their golden years can actually retire at an appropriate age.

This new research was a follow-up to a study released last summer, in which the pair highlighted increased borrowing among adults aged 62 to 69 since the late 1990s.

For this group, median debt levels jumped from $19,000 to $32,100 (inflation adjusted) and debt as a share of total assets increased.

Should You Pay Off the Mortgage Before Retirement?

This is a great question, and not necessarily the easiest one to answer.

This study tells us that those who pay off the mortgage earlier tend to retire faster.

So if you don’t want to work forever, it might be wise to pay off the mortgage early, or turn to a shorter-term fixed-rate loan, such as the 15-year fixed mortgage.

The other side of the coin is that mortgage rates are exceptionally low right now, with many borrowers enjoying rates in the 2-3% range. And if you factor in the mortgage interest deduction, the real rate of interest is even lower.

In other words, it doesn’t cost a lot to hold onto the mortgage these days. This is especially true if you can put your money to work somewhere better, such as the stock market or even somewhere safer, like bonds.

It doesn’t make sense to pay the mortgage before maxing out retirement contributions either. If your company is willing to match “X” amount of your income, it’s foolish not to take them up on the offer.

There’s also the chance that your house could go down in value, though over time this tends to work itself out. Still, you’re dumping money into an illiquid asset, and tapping the equity will cost money.

Find a Balance to Retire When You Want

There are certainly pros and cons to paying off the mortgage before retirement. The obvious one being that you actually CAN retire!

A paid-off mortgage should give you peace of mind and let you sleep at night, and give you the confidence to call it quits at work.

Those who whittle down their mortgage earlier on might also be more money-conscious knowing they’ll have access to less money.

After all, if you’re paying the bare minimum, you might think you’ve got extra play money to wine and dine and travel the world.

At the same time, there are a lot of benefits to holding onto your mortgage these days, what with the low interest rate and tax deductions.  Factor in inflation and today’s mortgage payment could seem like a car payment in 20 years.

At the end of the day, it’s best to find a balance that works for your personal financial situation.

It’s important to contribute to your nest egg AND pay off debts as you travel the road to retirement. That way you’ll actually get there.

Read more: Should I pay off the mortgage or invest instead?