Is Real Estate Going Down, At Long Last? Why You Shouldn’t Get Your Hopes Up Just Yet

The headlines surrounding the housing market and mortgage rates have been quite pessimistic lately.

So bad that you might think this so-called real estate bubble we’ve supposedly been in is about to pop, once and for all.

The warnings have been coming for a while now, but more and more folks are saying enough is enough.

If things do take a turn, it might allow fence sitters to finally get in without having to enter a bidding war, or pay a sky-high premium.

But there’s just one problem – there’s really no catalyst for real estate to cool off. And, it’s actually not as expensive as it seems.

Is Real Estate Really That Expensive? 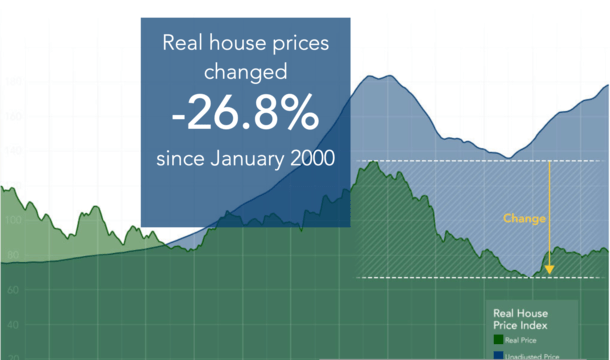 The topic du jour has been inflation – everything seems to have gone up in price, real estate included.

Ultimately, this means the value of each dollar you own isn’t worth as much as it once was.

So if you’re looking at home prices through a 2020 lens, or an even earlier one, chances are you’re making them look a lot higher than they appear.

We can’t simply compare today’s home prices to those seen back in 2006, at the height of the housing bubble.

The other thing you need to consider is wage growth. The more a prospective home buyer makes, the more they can afford.

Sprinkle in still-low mortgage rates and things aren’t so bad for a buyer, even if inventory is slim and competition high.

Believe it or not, despite the record year-over-year gains in home values, today’s buyers are still much better off than their predecessors.

Per the latest analysis from First American, so-called “house-buying power-adjusted house prices” are still a whopping 37.5% below their 2006 housing boom peak.

Now I always point out that 2006 shouldn’t be used as a barometer, given how overpriced and unsustainable prices were back then.

But the sheer margin between now and then tells me that we’ve still got some legs in this housing boom, even with the recent home price increases baked in.

And this is despite the fact that unadjusted home prices are roughly 36% higher than they were when the housing market peaked in 2006.

Now at some point this obviously has to give, but the data might be telling us there are still a few good years left.

The big question mark hanging over the housing market is interest rates, which can have a big impact on purchasing power.

They’ve already risen off their record lows and most economists see them climbing further in 2022.

Obviously that alone can erode purchasing power, but there is something that can offset higher mortgage rates. And that’s higher wages.

And the whole reason interest rates have been pressured higher is due to inflation, which is typically aligned with a growing economy.

What also comes with a rising economy is wage growth, something First American’s Mark Fleming points out in the analysis.

This is why home prices and mortgage rates can rise together, despite seeming to have an inverse relationship.

There’s also some question about how much rates may rise. The Fed is going to taper its purchase of mortgage-backed securities (MBS), but they seem to be hesitant to raise rates.

This uncertainty could mean a more subdued increase in mortgage rates in 2022.

At the same time, the fear of higher mortgage rates could be a great motivator for home buyers next spring!

What Happens to Real Estate with Nearly 4% Mortgage Rates?

Fleming ran a scenario where mortgage rates increase from around 2.84% to the expected end-of-year level of 3.2%.

Assuming the borrower puts down five percent, and the average household income is steady at $68,658, purchasing power falls roughly $21,500.

However, we need to inject wage growth into the equation as well to get an accurate picture.

If incomes continue to rise at a monthly rate of 0.2% through the end of this year, the higher wages will reduce projected end-of-year 2021 house-buying power by just $18,000.

And if this trend continues through the end of 2022, the projected end-of-year 2022 decrease in house-buying power would be only $35,000.

Remember, that assumes the 30-year fixed rises as much as expected. If it doesn’t, for all sorts of possible reasons, purchasing power may not be much different next year.

So if history follows suit, we could have a 2022 housing market that is still much cheaper than it was during the prior peak. And thus, prices will keep climbing.

Read more: When will the housing market crash again?

previousZillow Offers Shuts Down Because It Can’t Forecast Future Home Prices, 25% of Workforce to Be Let Go
nextThrive Mortgage Review: The First Lender in Texas to Complete a 100% Digital Mortgage