There’s an old adage in the commodities market that says, “the best cure for high prices is, high prices.”

No, it’s not a typo. The logic is basically that an elevated price over time will naturally lead to a decrease in demand.

And as we all know, if demand for something falls, prices must come down, otherwise you risk an oversupply.

Since the beginning of 2022, mortgage rates have surged to levels not seen since 2019, which as I’ve argued are basically a commodity because they’re not much different from one another.

So, is it time for mortgage rates to come down simply because they’ve been up for so long?

What Goes Up Must Eventually Come Down, Right? 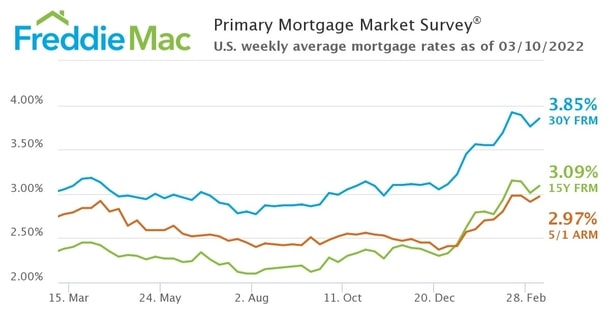 The year 2022 might as well be known as the mortgage rate reckoning. After pundits wrongly predicted rates would rise in 2019, 2020, and 2021, they finally did!

Today, you would be lucky to get your hands on a 30-year fixed mortgage rate at 4.5%. Yes, in less than three months, interest rates have basically gone up 50%.

Perhaps that’s exactly what they need to finally reverse course though. When a price rises so much, so quickly, it’s surely due for a relief rally, right?

Well, I’ve been thinking that for a while, but it’s yet to materialize. While there have been some pullbacks, they’ve been mostly short-lived.

Instead of seeing real relief, there have been higher highs, with no end in sight. But it’s often when there’s no hope left that things finally improve.

Mortgage Lenders Will Need to Lower Prices to Generate Business

A while back, I wrote about the benefit of applying for a mortgage when things are slow.

The general idea is that more savings are passed onto consumers when lenders aren’t as busy.

Conversely, if they’re slammed, they won’t give you the best available rate, and heck, they may not even return your call.

This was the case over the past few years, but times have changed, in a hurry.

If banks, mortgage lenders, and mortgage brokers want to continue generating business, they’re going to need to lower their prices.

After all, Black Knight recently noted that so-called “refinance candidates” have dwindled in the face of higher interest rates.

There were about 20 million existing homeowners who could benefit from a mortgage refinance in 2020, and 11 million to start off 2022.

Now there are only about 3.8 million, and that’s based on data from mid-February when the 30-year fixed was still below 4%.

It’s now mid-March and mortgage rates are about a half-point higher.

Seeing your potential customer base drop from 20 million to maybe two million in the span of two years is clearly a problem.

Such a massive drop in demand surely calls for lower prices, but they’ve yet to arrive. That could change soon.

More recently, Black Knight said rate and term refinance activity fell for the fifth consecutive month in February to its lowest level in three years. Such activity is now more than 80% below 2021 levels.

And both cash out refinance and rate and term refinance rate locks fell 15.3% and 34.1%, respectively, from January to February.

Again, this is February data, which in hindsight probably won’t look so bad.

The only bright spot was home purchase lending, which saw a 7.2% month-over-month increase, and a 5.6% year-over-year gain.

But that won’t be enough to offset the decline in volume overall, which at some point will translate to savings being passed along.

Ultimately, some lenders will be forced to make less per loan, which will increase competition and highlights the importance of shopping around.

But Black Knight noted it has widened by 40 basis points over the past three months to over 2.25%.

As such, the going 30-year fixed mortgage is closer to 4.5% with many banks and lenders, which tells me they’re pricing loans cautiously.

That’s understandable, given the unknowns and the Fed’s upcoming rate hike. But it also tells me there’s quite a bit of room to lower rates if there’s any sliver of good news.

With much of the bad already seemingly baked in, we could see a mortgage rate rally over the next couple weeks.

It could come at a good time as the spring home buying season kicks off. But there’s no guarantee.

And as I often say, mortgage lenders never hesitate to raise rates, but will take their sweet time lowering them.