Conventional wisdom says its best to list your home in spring if you want to get the most bang for your buck.

And by that, I mean sell your home in a relatively short amount of time for a good price.

After all, once winter thaws there are typically a lot more buyers on the lookout for their dream home, which means bidding wars and attractive offers.

But a new analysis from Redfin (yes, them again) revealed that winter is in fact the best season to list and sell a home, at least if the past couple years are any indication.

The real estate brokerage looked at listings from March 22, 2011 to March 21, 2013, and found that homes sold more often, faster, and for more money during winter than any other season.

For example, 65% of winter listings (Dec. 21 – March 21) were likely to sell within six months, compared to just 56% of non-winter listings.

And the average sale-to-list price ratio was -2.3% for winter listings, compared to -3.5% for non-winter listings. Amazingly, summer was the worst season in this department.

The average days on market were also significantly lower for winter listings, at 26 compared to 33 for non-winter months. 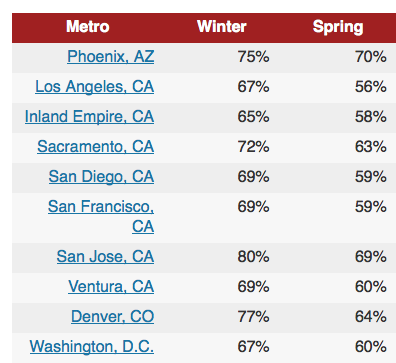 In places where winters aren’t all that cold, the likelihood of selling a home quickly was strongest in winter.

And though the numbers were much lower in bitter-cold areas of the nation, including Boston, Chicago, and Washington DC, winter was still outperforming other seasons in this key metric.

So Why Is Winter a Winner?

Well, the takeaway from Redfin was that only “serious buyers” come out to play in winter, while the lookie loos typically waste everyone’s time during the warmer months, namely spring and summer.

Put simply, winter home selling is all about getting the deal done, not testing the waters or walking into an open house because the home looks “cute.”

At the same time, there will always be individuals that need to buy a home, no matter what the season. Things like job relocation or a growing family come to mind.

Redfin noted that this winter could be especially strong, seeing that there’s a lot of fear about mortgage rates rising above 5% in 2014.

So last minute shoppers might be trying to beat the expected interest rate rise before it’s “too late.”

Yes, people seem to think mortgage rates in the 4-5% range is the norm, so avoiding the dreaded 5% and up rate will be paramount for today’s buyers.

For the record, there are generally fewer listings during the colder months, but there are also fewer prospective buyers.

Additionally, winter sellers might be more desperate to unload their homes, making it a good time to land a gem of a property while avoiding a bidding war.

I’d just take this analysis with a grain of salt, given how weird the housing market has been over the past couple years. Similar reports say it’s best to list in spring to yield the highest sales price.