A few years back, the Fed began purchasing mortgage-backed securities in an effort to lower interest rates on mortgages.

Over time, the endeavor, known as Quantitative Easing (QE) proved successful and borrowers enjoyed the lowest mortgage rates in history.

As planned, mortgage rates dipped to record lows, prompting a housing recovery that at the time appeared as if it would never come.

The 30-year fixed mortgage hit its lowest point during the week ending November 21, 2012, averaging 3.31%, according to statistics from mortgage financier Freddie Mac.

About five months later, the 15-year mortgage fixed bottomed out at 2.56% during the first week of May.

Mortgage Rates About 1% Above All-Time Lows

Since then, rates on both popular loan programs have increased significantly, rising to 4.46% and 3.47%, respectively, after the Fed hinted at ending or tapering its QE program.

Rates on each are now about a percentage point above their all-time lows, but still historically cheap.

Still, it doesn’t seem good enough these days, now that borrowers have gotten a taste of something better.

It’s a weird human psychology, but once we experience something better, it’s hard to “go back” to the prior situation. 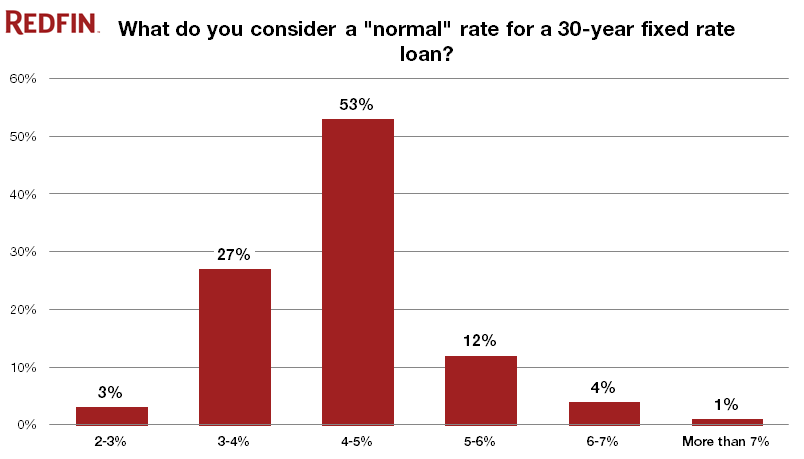 Case in point, a new survey from property search website Redfin, which revealed that homeowners now consider mortgage rates below 5% as the norm.

The company conducted the survey in November, asking home buyers what they considered the “normal” rate for a 30-year fixed mortgage.

The overwhelming response among all those polled was 4-5%, with 53% selecting that rate range. Even worse, 27% felt a rate between 3-4% was normal.

It then slips considerably, with 12% indicating a ate between 5-6% is the norm, and small handfuls selecting rates as low as 2-3%, and others going with a rate higher than 7%.

A staggering 83% of respondents felt a normal fixed-mortgage rate was somewhere below 5%. Hmm…

If we further break it down by first-time home buyer and seasoned home buyer, the numbers aren’t much different.

In fact, seasoned home buyers seem even more delusional than first-timers. For example, 57% of seasoned buyers feel rates between 4-5% are the norm, compared to just 48% of first-timers.

However, 31% of first timers indicated a rate between 3-4% was normal, compared to just 23% of the seasoned homeowners.

Here’s the reality of the situation. The 30-year fixed has averaged 6.7% since 1990, more than two percentage points above current levels.

And fixed mortgage rates only dipped below the 5% threshold once before March 2009. So to say consumers have gotten used to something that isn’t at all normal would be an enormous understatement.

Oh, and 40% of prospective buyers said they would be unable or unwilling to purchase a home if rates rise much more. Troubling to say the least.

Makes you wonder if this recovery is for real, or simply rate driven.

Read more: What mortgage rate should I expect?

1 thought on “How the Fed Ruined Mortgage Rates Forever”