Mortgage Forbearance Rate Only Rises 3% From a Week Ago, But Second Wave Could Be Coming

Maybe there’s some good news out there, or maybe it’s just the calm before another storm.

The mortgage forbearance rate barely budged during the week ending May 10th, per the latest installment of the Forbearance and Call Volume Survey from the Mortgage Bankers Association (MBA).

The group said the total number of loans in forbearance increased to 8.16% of loan servicers’ portfolio volume from 7.91%, a mere three percent increase from a week prior.

It could represent a flattening in the forbearance rate after a massive surge from basically zero in March, or it could be a pause before another breakout, possibly mirroring COVID-19.

While the forbearance rate obviously increased again, as everyone expected, the 25 basis point weekly increase was the smallest gain since the week ending March 16th.

It was also pretty consistent across all loan types, with both Fannie/Freddie loans and Ginnie loans (FHA/USDA/VA) seeing very minor increases from a week earlier.

As noted last week, it is somewhat early in the month, as you can generally pay the mortgage until the 15th without being late, so things could worsen in the next report.

But it does appear that the situation may have cooled down for now.

If they’re spending less overall because they’re confined to their homes and lowering their mortgage payments, it could provide a form of stimulus without actual mortgage relief.

However, he added that borrowers with FHA loans and VA loans “are more likely to be employed in the sectors hardest hit in this crisis,” which explains the higher forbearance rate.

So even if things smooth out from here, there’s still a massive number of mortgages in forbearance.

Fortunately, so-called COVID-19 payment deferral will be an option for homeowners in forbearance plans.

It allows them to pay back the missed payments only when they refinance the mortgage or sell their home, which makes it much easier to get back on track.

Of course, that hinges on them having a job or finding a new one by the time the forbearance ends, which is either 180 days or 360 days if extended.

The COVID-19 Pandemic Could Last 24 Months 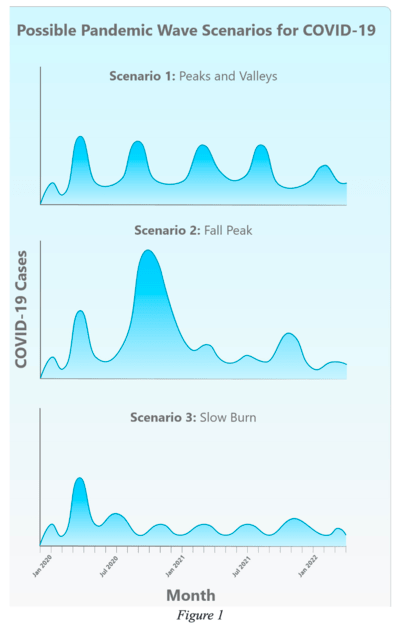 Here’s the problem – while mortgage forbearance offers up to 360 days of relief, this pandemic could easily double that length of time.

A study from Center for Infectious Disease Research and Policy (CIDRAP) said the current COVID-19 outbreak “will likely last 18 to 24 months,” based on other recent flu pandemics.

The first wave took place this spring, meaning it might not abate until 2022.

In the meantime, we may have to continue social distancing and other extreme measures, which will likely displace a lot of workers.

Companies that have temporarily furloughed employees or those who haven’t taken any action may eventually need to permanently lay off staff as time goes on.

This could lead to more mortgage forbearance requests, perhaps a second wave at some point later this year.

It will really depend on how things play out with the pandemic, but CIDRAP laid out three scenarios, including a fall peak that will exceed the surge we already experienced.

There’s also the idea of a new normal where some lost jobs may not be regained, though it’s possible others will be created in their place.

Either way, it’s too early to tell how bad things get, both for mortgages and the real estate market.

While home buyer demand has seen a bounce back, there’s a good chance it too will wane later this year if COVID-19 flare-ups surface.

Read more: Mortgage Forbearance Waiting Period Will Be Only 3 Months

previousLoanSnap Review: Using Artificial Intelligence to Make Smart Home Loans
nextThere Will Be a 3-Month Waiting Period to Get a Mortgage After Forbearance