Mortgage Rates Should Be Lower, Here’s Why They Aren’t

What’s not to like about an interest rate at or below 3% that is fixed for the next 30 years?

While that’s certainly hard to argue, it doesn’t change the fact that mortgage rates could and should be even lower right now based on historical relationships. 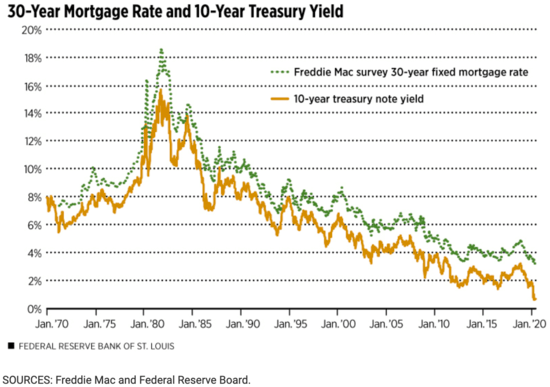 An insightful blog post by William R. Emmons, assistant vice president and economist at the Federal Reserve Bank of St. Louis, explains a semi-unusual phenomenon taking place at the moment.

Typically, 30-year fixed mortgage rates and Treasury yields have a pretty consistent spread, which is driven by them being similar investment products with comparable durations.

In short, mortgages typically pay off much sooner than 30 years, perhaps closer to a decade on average, but due to this uncertainty and the possibility of much faster prepayments, provide more yield to investors.

As such, borrowers aren’t receiving the lowest possible mortgage rates they might obtain during normal times.

Of course, this is being masked due to rates already being at/near record lows. Pretty easy not to attract much negative attention in this case.

It’s kind of like someone complaining after a company slashes the price of a popular item by 50%. It just wouldn’t happen.

Regardless, it doesn’t mean mortgage rates shouldn’t be lower.

As you can see from the image above, mortgage spreads are historically elevated, and have only been higher on a few occasions over the past 50 years.

In fact, aside from being a bit higher for a few weeks in late 2008 during the Great Recession, the last time spreads were this wide was all the way back in 1986.

That means there’s room to lower mortgage rates even more, whenever lenders get around to it… 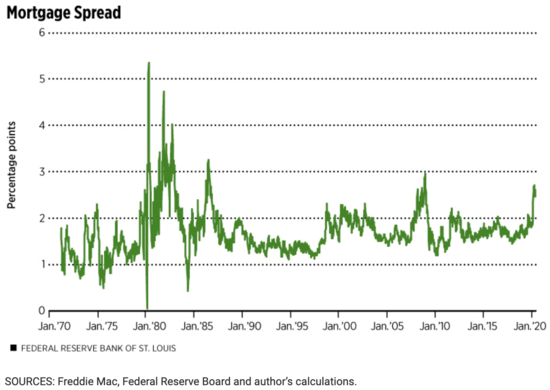 If you’ve been following the 10-year bond yield over the past few months, you might be wondering why mortgage rates aren’t even lower than they already are.

Since the start of the year, the 10-year has fallen by roughly 1.2%, whereas mortgage rates have dropped just 0.6%, per Freddie Mac weekly survey data.

Remember when the Fed swooped in to save mortgage rates when the COVID-19 pandemic first got underway?

Well, Emmons notes that “the Federal Reserve is concerned about the incomplete transmission of Treasury yield declines to mortgage borrowers because changes in mortgage rates are an important way monetary policy affects the economy.”

He believes the culprit is the primary mortgage market, aka banks and mortgage lenders at the retail level.

The secondary market piece of the spread that includes Fannie Mae, Freddie Mac, Ginnie Mae and the securitization of mortgages into MBS apparently isn’t the problem.

As to what the primary mortgage market is doing wrong, it might be capacity constraints (remember mortgage rates aren’t as low when lenders are busy).

Or perhaps “increased risk aversion among lenders or slacker competition between originators than is typical.”

In other words, lenders are busy and really have little to no reason to start a race to the bottom, other than UWM and its 2.5% mortgage rate.

Most lenders are happy to keep their rates where they’re at and continue to set new monthly and quarterly records for loan origination volume in the meantime.

Additionally, they don’t want to get caught out if they lower mortgage rates too much and somehow 2020 delivers some sliver of good news for a change.

Now the good news – if this all plays out like it did in times past, these temporary roadblocks will lift and mortgage rates should move lower.

“If not, reforms of the mortgage origination or servicing sectors may be in order,” said Emmons, which sounds like a warning?

In summary, expect mortgage rates to sink to new record lows eventually as lenders play catch up to bond yields and finally give in to market conditions.

Read more: The 30-Year Fixed Just Hit a New Record Low, What Should You Do?

previousAlterra Home Loans Review: One of the Largest Hispanic-Owned Mortgage Companies
nextVeterans Can Now Get Rates as Low as 2.25% on a 30-Year Fixed Mortgage