Nearly 70% of Home Listings Are Stale, but Maybe Not for Long

Even though we’re deep into April, the typical spring home buying season doesn’t seem to be in full swing.

It usually picks up in March, but has yet to really take off nationwide, though some cities like Baltimore, Minneapolis-St. Paul, and Philadelphia have enjoyed an uptick in activity.

A new report from Redfin revealed that despite new listings getting a 9.2% boost last month, overall housing inventory actually slipped 0.7%, the first year-over-year drop since December 2013. 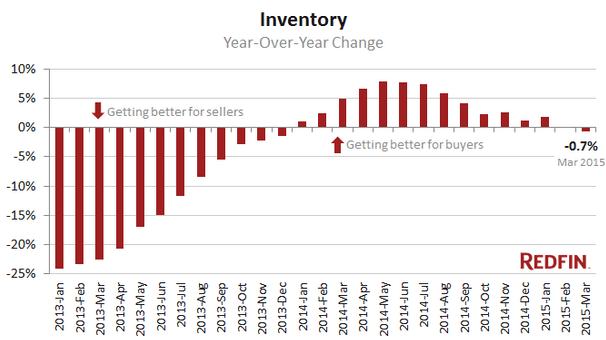 That means it’s tougher for buyers to find homes, with increased competition driving up prices and making it difficult to get an offer accepted. Bidding wars are now the norm and that trend doesn’t appear to be abating.

Sellers are once again in the driver’s seat because fewer listings equate to more offers, which also boosts the prices of what little is out there.

What About Listing Quality?

Aside from the inventory shortage, the quality of homes for sale is also questionable. Redfin noted that nearly 70% of homes on the market were “stale,” that is, older than 30 days.

This means there’s a good chance said homes are overpriced, in need of repairs, or have some other issue that is preventing a speedy sale.

Now it’s not uncommon for stale listings to make up the lion’s share of total inventory, but these homes are starting to get scooped up alongside fresh listings, instead of resulting in the typical price reduction.

And in some cities, fresh listings are actually gaining on old inventory because there is so little on the market and buyers are becoming increasingly desperate.

In other words, even the old stuff no one wanted to touch is finally being unloaded to willing buyers who previously would have looked elsewhere. 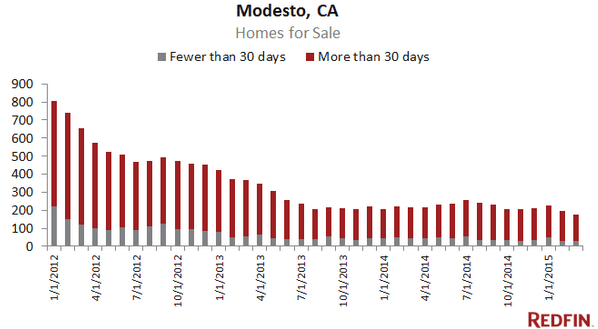 Last month, it had only 29 fresh listings – meanwhile, its stale listings were also rock bottom, giving prospective buyers were little to nibble on.

Of the 50 markets Redfin analyzed, about 30% of unsold homes were considered “fresh,” or less than a month old, as of the end of March, compared to just 24% three years ago.

The idea here is that inventory is so low that buyers are purchasing the older stuff and boosting the fresh share.

But because the fresh share is also historically low, inventory can’t keep up with demand, which means higher home prices, a double whammy for buyers.

Not only can they not get their hands on quality homes, they’ll have to pay more for the stuff that normally wouldn’t sell straight away.

And because new properties are instantly hot commodities, buyers are resorting to the older listings that they would normally become “inventory blind” to in order to avoid a bidding war or exceeding their budget.

The only real solution is to build more new properties because many existing sellers are still trapped in their homes, either because they remain underwater or are simply unable to move up to bigger and better homes.

The upside is that sellers can continue to list for a premium. It might even be a good time to sell that haunted house.