Put simply, it measures the stability of the housing market on the national, state, and metropolitan level and determines whether it’s within its historical stable range.

At the moment, the national housing market is considered “weak” because it has a MiMi value of -3.08 points. In order to be considered stable and “In Range,” the MiMi value must fall between -2 and +2.

The good news is that the national MiMi improved by 0.03 points from December to January, and 0.81 points from a year ago.

In other words, we are getting closer and closer to our historic, stable range, where fundamentals align to create a healthy housing market.

The nation’s all-time low reading of -4.49 occurred in November 2010 when the housing market was determined to be at its weakest level.

What Kind of Data Is Behind MiMi?

There are four indicators that when combined create a composite MiMi value for each housing market, including:

Which State Housing Markets Are the Most Stable? 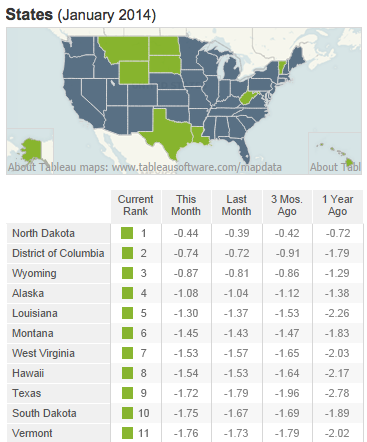 Though the housing market has improved tremendously over the past several years, only a handful of states are in range and stable. Just 11 to be exact, though others are on the cusp.

Thanks to a flourishing energy sector, North Dakota is considered the most in range, with a value of -0.44.

The District of Columbia, Wyoming, Alaska, and Louisiana rounded out the top five at the state level.

However, if home prices surpass wage growth and become too overheated, the MiMi could become “elevated” and signal danger in the corresponding market.  This tends to happen when purchase applications go haywire and payment-to-income ratios surge, which can occur when home prices and mortgage rates rise rapidly.

At the state level, Nevada was considered the most unstable state with a MiMi value of -5.85, though this number is down from -7.69 a year earlier.

It’s considered a weak but improving market, with low purchase application volume, along with poor employment and an elevated number of mortgages still delinquent.

San Antonio Is the Most Stable Metro in the Nation 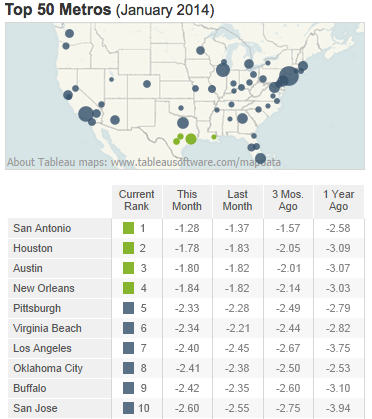 At the metro level, San Antonio (-1.28) is the big winner thanks to low unemployment and solid purchase application numbers, aka demand.

Houston, Austin, and New Orleans were the only other stable metros in the nation, and Pittsburgh rounded out the top five, though it’s just outside the stable range.

It should be noted that MiMi does not factor in all-cash home sales (which are probably widespread in Vegas) or jumbo-financed homes that exceed the conforming loan limit or high-cost loan limits.

But Freddie Mac has a generous range of -2 to +2 where a housing market is still considered to be “in range,” so that should cancel out any noise from data shortcomings. 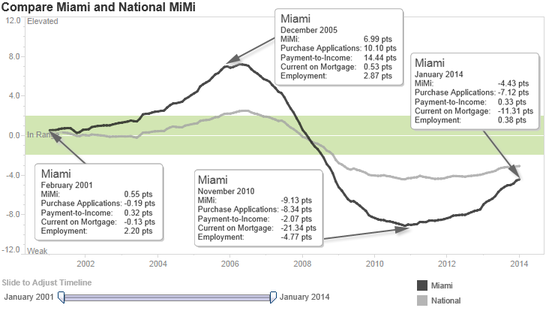 Check out the graphic above for the Miami metro. It details how a housing market that is out of range can be dangerous if weak or elevated.

During the bubble, purchase apps were surging and mortgage payments were well above incomes, signaling a great fall that we all know came shortly after…