They say affordability is at near-record levels, yet the number of prospective buyers looking outside their own metro is rising, per a recent report from Redfin.

The company noted that 21% of Redfin users “searched mostly” for properties outside their home metro area in the second quarter, up from 20% a quarter earlier.

The so-called “Redfin Migration Report” is a sample of more than a million users across 75 metros during peak home buying season (April through June). It relies upon IP addresses to figure out the location part.

Per Redfin, home searches are an indicator of future home sales, so this might provide a window into in the future. 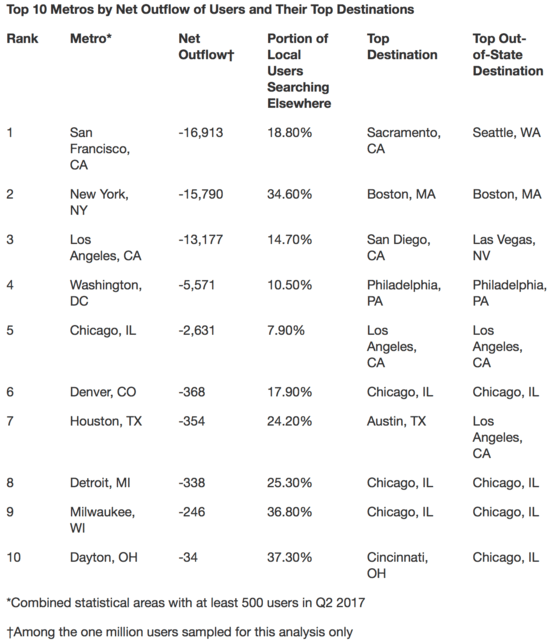 In red-hot California, the typical migration patterns seem to be out of the Bay Area and Los Angeles, and into Sacramento and San Diego, respectively.

The latter metros are much cheaper than the former, though they still aren’t very cheap. And the inventory of available homes is still a problem either way.

In San Francisco, some 16,913 Redfin users thought about exiting the metro for cheaper pastures, with Sacramento the top in-state destination, and Seattle, WA the top out-of-state locale.

In Los Angeles, 13,177 users thought about taking the 5 South to San Diego, while some pondered braving the heat of Las Vegas.

For New Yorkers, it was all about Boston. It was the top in-state and out-of-state destination consideration for 15,790 folks during the second quarter.

Some 5,571 users from DC pondered a move up north to Philly, which is probably a lot cheaper than the former.

Interestingly, Chicago natives want to move to Los Angeles in droves – well, it’s the top destination. How they’re affording it is beyond me.

I know Chi-town is a lot cheaper and still recovering from the housing crisis. 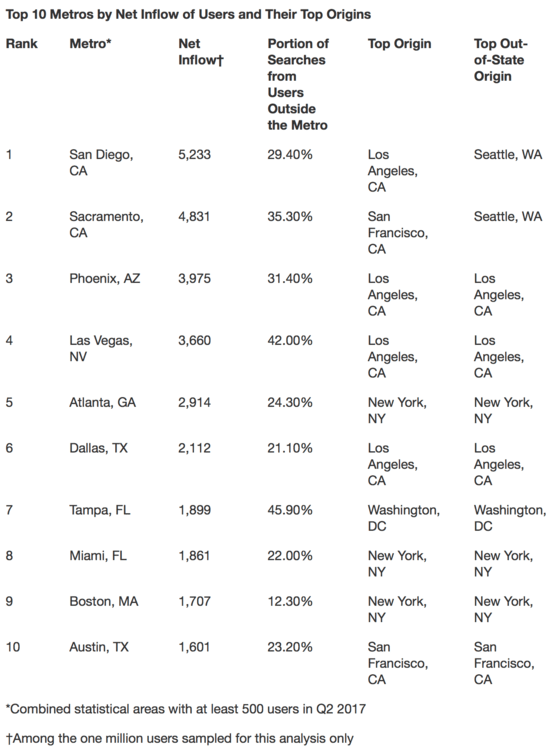 I guess San Diego really is America’s Finest City, seeing that it was the top destination by net inflow of users. It’s attracting home buyers from rainy Seattle, which probably has something to do with the weather.

Sacramento was a close second, also receiving an influx of buyer attention from Seattle.

Phoenix is also rising in the ranks, getting the LA crowd that is fed up with paying way too much for a home there. It’s not that much hotter, is it?

LA folks are also thinking about moving to Las Vegas and Dallas, both of which are cheaper and better stocked in terms of inventory.

The takeaway here is that we seem to be back where we were about a decade ago. I remember the same trends back then.

What’s odd is that mortgage rates remain near record lows and affordability is apparently really good.

Is Housing Affordability Really That Good?

Speaking of that affordability, Freddie Mac VP Chief Economist Sean Becketti dispelled some of the confusion behind the Housing Affordability Index (HAI), which was developed by the National Association of Realtors.

Despite the HAI being in really good shape, homes are still expensive, at least on a nominal basis. They are at all-time highs, though real prices continue to be cheaper than recent years.

They’ve risen six percent on average since 2012, while incomes have only mustered a 2.4% yearly increase.

Secondly, homes are getting harder and harder to find, with inventory a constant problem. Again, many are locked into their homes either by their low rates or by their lack of purchasing power at these new heights.

The HAI also tends to ignore some important details since it only measures if the median-income family has sufficient income to pay a mortgage on a median-priced house.

There’s also the issue of down payment, which is a huge hurdle, along with credit score and DTI. If these requirements aren’t met, it might not matter if they have the income to afford the home.

Read more: One-third of buyers made offers without visiting the property.