People Camped Out to Get Their Hands on New Home Lots

If you’re attempting to feel out the housing market at the moment, consider this: People are reportedly camping out in their cars to snag the best lots in a new housing development outside Dallas.

Sure, it’s just one housing development in one city, but the message is clear; folks are getting crazy over real estate again.

It sounds more like a scene from a Black Friday deal at Walmart or Best Buy, but no, this has nothing to do with the latest PlayStation or iPhone.

Instead, these folks camped out (some in cars, some in tents, some on cots) to get the first crack at one of 83 homes that went on sale Tuesday in McKinney, TX, a popular suburb north of Dallas that is one of the top 10 fastest growing cities in the U.S.

First Texas Homes, which is selling the lots, said they expected to sell all of them within 24 hours of launching the sale.

As for why people camped out, it was to get so-called premium lots, such as corner lots. One person in the line already had their lot picked out and didn’t want anyone else to take it.

It’s not just Texas that’s enjoying a real estate boom. In New York City, the price of real estate in Manhattan hit a new record high during the third quarter.

In the Big Apple, a single square foot would set you back an astonishing $1,497, per a new report from Douglas Elliman.

Douglas Elliman chairman Howard Lorber told CNBC, “Everything is selling fast, I don’t see how there could be a bubble.” Famous last words? We’ll see.

The price per square foot surged 18% from a year earlier and 11% quarter-to-quarter, thanks mainly to new condo developments in the city.

That, coupled with limited inventory, is keeping demand red hot and propelling prices to new highs, whether affordable to the masses or not. 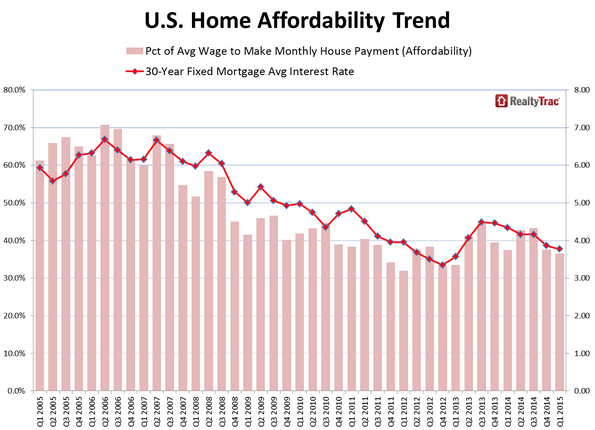 Despite all these home price increases, housing affordability has actually improved over the past couple years.

A new report from RealtyTrac found that while home price appreciation outpaced wage growth between Q1 2014 and Q1 2015 in 68% of U.S. counties analyzed, the average mortgage rate on the 30-year fixed slipped from 4.34% to 3.77%.

Additionally, because wage growth outpaced home price appreciation in 32% of counties included in the report, buying a home in the first quarter of 2015 required a smaller share of the average wage in 58% of counties nationwide.

Still, the average U.S. home price has risen 24% during the housing recovery (since the first quarter of 2012) while the average weekly wage has only chalked a seven percent gain over that period.

That means many regions of the country have fallen out of reach for a lot of potential buyers, especially first-timers that are integral to a sustainable recovery.

The good news is that the average wage has increased 34% since 2006, when home prices were at their least affordable levels in the past 10 years.

The combination of higher wages and lower mortgage rates has led to a 48% improvement in affordability since that time.

But if rates rise just a quarter of a percent, 13% of housing markets will exceed historical affordability norms.

So a lot hinges on mortgage rates staying put, which many believe won’t be the case for much longer. Interestingly, if wages increase and the economy looks better, interest rates will also probably rise, that’s just how the economy works.

If prices continue on their upward trajectory, a wage increase likely won’t help much if mortgage rates rise in tandem.

For the record, “virtually all markets in California and metro New York” are already out of reach, even with nationwide affordability still decent.

Perhaps home price appreciation is beginning to top out in some of these hot markets.

Either way, the mentality we’re beginning to see, where home sales are going down like a tent sale (no pun intended), is a bit disconcerting.

Sure, it’s not 2006 all over again, but we’re certainly heading that way, even with those unmissable low mortgage rates available.