If you’re scratching your head wondering why home prices continue to go up and up, consider the fact that it’s actually cheaper now than it was a year ago.

So despite the massive year-over-year gains in property values over the past eight or nine years, home buying remains in reach for many. 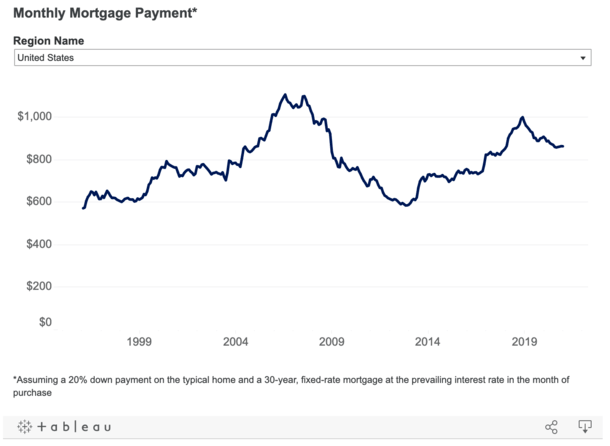 Just take a look at this graph from Zillow, which shows the monthly mortgage payment on a typical U.S. home with a 20% down payment and a 30-year fixed at current prevailing rates.

It’s important to note that this is only the principal and interest, not the full PITI that includes property taxes and homeowners insurance (or HOA dues if applicable).

Those costs obviously increase as well as property values climb higher, though not necessarily by a large margin depending on the purchase price.

Anyway, the reason it’s cheaper mortgage payment-wise is due to the near-record low mortgage rates.

This illustrates the power of interest rates, which were basically a percentage point higher than they were in late 2020.

While the relative affordability mixed with the lack of housing inventory has kept the real estate train chugging along, prospective home buyers might not be so lucky going forward.

After all, Zillow expects home prices to rise 10.5% by December 2021, and 30-year fixed mortgage rates to perhaps hold steady.

You might say $91 extra per month is no big deal, and you could right, assuming we’re talking about the typical home.

But when you get into more expensive markets, the impact can be more significant.

What Happens When Mortgage Rates and Home Prices Rise Together?

The scenario above assumes mortgage rates hold steady, which is entirely possible based on 2021 forecasts.

But let’s assume both home prices and mortgage rates rise in tandem, a phenomenon that occurs despite folks thinking it’s illogical.

There isn’t necessarily an inverse relationship with home prices and mortgage rates. That is to say, one doesn’t go up and the other down. They can both move in the same direction.

In fact, if the economy shows signs of improvement, both home prices and interest rates can rise simultaneously. It’d be totally normal.

If the 30-year fixed rose to 3% and home values moved 10.5% higher in line with Zillow’s expectations, the monthly payment in December 2021 would rise to $992, a 15% increase from current levels.

Looking at things the other way around, the average rate on a 30-year fixed-rate mortgage would need to somehow fall to roughly 2.08% for December 2021 monthly payments to equal December 2020 payments.

While there’s a good chance that won’t happen, the typical mortgage payment in most scenarios won’t rise above $1,000 per month from current levels of around $860.

Of course, in more expensive regions of the country like Boston, the monthly payment could rise $395 thanks only to home price growth (with flat interest rates).

So the impact can vary greatly depending on where it is you’re thinking of buying a home.

The other issue that sometimes seems to get ignored when simply looking at differences in monthly outlay is the down payment.

Zillow assumes a home buyers are making a 20% down payment on a home, which isn’t the norm.

With down payments of say 5 or 10%, you now have a larger loan amount, a higher interest rate due to increased risk, and the obligatory mortgage insurance, whether lender paid or not.

As a result, payments can really begin to skyrocket, and that’s assuming interest rates don’t budge from current levels.

Still, the low mortgage rates are ensuring that this real estate party goes on, and may in fact be one of the main reasons it has remained red hot.

previousThe CEO of a Tech-Enabled Loan Servicer Believes We Might Be on the Cusp of Another Foreclosure Crisis
nextInterFirst Mortgage Review: A Private Equity-Backed Lender Looking to Grow