In fact, homes are being scooped up at the fastest pace in more than two years, per Zillow.

During the second week of June, the typical listing accepted an offer after just 22 days, the best reading since June 2018, when it was a 21-day average.

It was even faster in certain Midwest cities like Columbus, Cincinnati, and Kansas City, where homes went pending in less than a week, in as little as five days on average.

Of course, this could be a temporary trend related to sellers being more reticent about listing their homes, while home buyers continue to exhibit a relatively strong appetite.

We’ll know as more listings hit the market and eliminate some of the recent scarcity. Zillow said new listings were up 14% month-over-month, so that could balance the market somewhat.

Meanwhile, there are still slow housing markets, with New York properties typically spending a staggering 70 days on the market before an offer is accepted, an increase of more than three weeks from the same time last year.

Similar trends have been seen in cities like Miami (55 days) and Atlanta (38 days), also struggling with COVID-19 related closures and disruptions.

Density Has Become a Problem 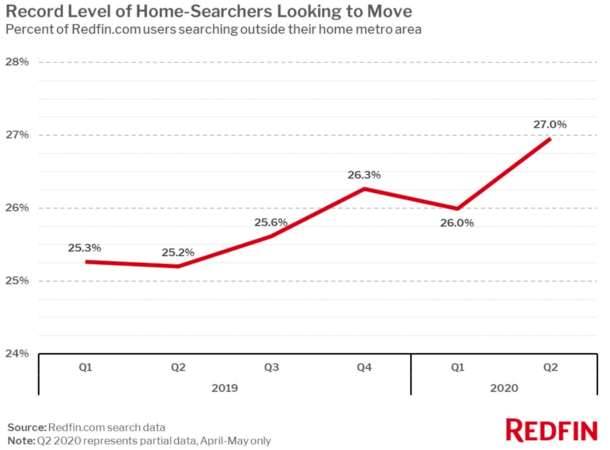 If there were a word to define 2020 at this moment, it would probably be “distance.”

Now it appears living too close to someone else is also a problem, as evidenced by the uptrend in rural and small town home searches.

Per Redfin, pageviews of property listings in towns with fewer than 50,000 residents increased 87% year-over-year in May.

That was more than triple the 22% year-over-year increase in pageviews seen for properties in cities with more than one million residents.

So it’s pretty clear a lot of prospective home buyers have the same idea about greener and larger pastures.

Specifically, many of them want to leave once-bustling metropolises like Los Angeles, New York, and San Francisco, which had the biggest net outflows (more leaving than coming) in April and May.

As for where everyone is going, the top destinations are:

The trend of moving from more expensive cities to cheaper ones isn’t new, but it’s probably more practical now since a lot of people can work remotely without issue.

This is especially true for tech workers, whose companies (Facebook, Twitter and Slack) have embraced the work-from-home movement.

For many, this means moving from expensive urban centers or coastal cities to more spread out, inland metros.

The big question remains whether this is a permanent, lasting sea change, or just a short-term trend that will reverse itself in coming months or years.

If it’s short-lived, it could mean opportunity to buy a home or condo in a once-hot urban center at a discount with less competition. Same goes for properties in vacation locales that have cooled.

Will Hot Housing Market Taper Off Later This Year?

We’re only halfway through 2020 and it has been beyond painful. It’s hard to imagine what’s to come for the rest of the year.

And it won’t be without fireworks, given we’ve got a presidential election in the fall that could be more contentious than usual thanks to increased mail-in voting.

There’s also the nagging issue of unemployment, which both the stock market and housing market have seemed to shrug off so far.

At some point, we’re going to need to face the music, and the same goes for expiring mortgage forbearance programs.

While some homeowners will be able to pick up where they left off in making monthly mortgage payments, others may not be so fortunate.

This could lead to an increase in defaults, foreclosures, and higher REO inventory, which could hurt the seemingly unscathed housing market.

Of course, an ongoing inventory shortage could provide a strong buffer, assuming the pool of eligible home buyers remains.

He added that he doesn’t expect a “sharp downturn,” noting that “there are some very solid underpinnings” giving the housing market strength.

I tend to agree – it’s not 2008 all over again. However, at some point in coming years it might be.

previousVeterans Can Now Get Rates as Low as 2.25% on a 30-Year Fixed Mortgage
nextAre Mortgage Points Worth the Cost?