Every year, housing demand picks up during the traditional spring buying season and eventually begins to fade as summer takes hold and kids make their way back to school.

But this year’s seasonal slowdown is even more pronounced due to what Redfin refers to as “buyer fatigue.”

So why are prospective home buyers tired? Well, Redfin attributes the lethargy to “high prices and low selection.”

Apparently they’re still touring properties in droves, but they’re less likely to make an offer. If they do, it’s more often on a lower priced home. Price sensitivity is becoming more of an issue. 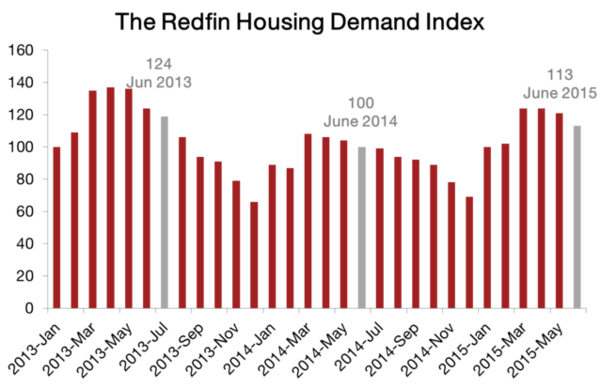 This all comes from the company’s inaugural Redfin Housing Demand Index, which is forecasting slowdowns in both home sales and home price increases.

It charted a similar path this year as in previous years, but the 6.7% decline from May to June is nearly double the 3.9% drop seen in the same period of 2014.

If you’re wondering, the data comes from millions of visits to Redfin’s home listing pages, along with the number of tours and offers made by Redfin customers.

Redfin also said it expects home prices to increase just 4.3% year-over-year in July, and only 2.2% YoY in August.

And paying well over list price is starting to become less common as starting prices are tested by more discerning buyers.

Home sales are also slated to slow down, with Redfin forecasting a YoY gain of 14.3% in July, followed by a 4.6% YoY increase in August.

There’s also less international competition thanks to a strong U.S. dollar. It was pretty common for Europeans, Canadians, and the Chinese to purchase properties in the States.

But now that their currencies have been devalued sharply against the dollar, it’s mainly Americans in the mix.

For some markets popular with foreign investors that have already experienced major price appreciation, demand will surely wane.

The Bubbly Years Are Over? 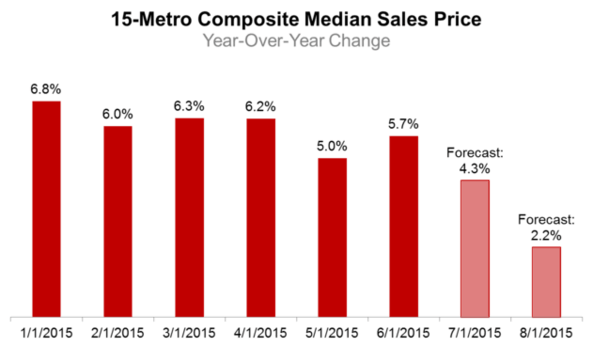 Meanwhile, the brains over at the S&P Dow Jones Indices expect home prices to moderate, according to the latest monthly home price report released today.

The S&P/Case-Shiller U.S. National Home Price Index increased 4.4% in May compared to a year earlier, up ever so slightly from the 4.3% YoY increase seen in April.

Managing Director and Chairman of the Index Committee at S&P David M. Blitzer argued that first-time home buyers have been the “weak spot in the market,” with hefty down payments, not rising mortgage rates, the likely culprit.

He believes home prices are more likely to slow than accelerate over the next two years, and thinks they’ve settled in at a steady 4-5% annual pace after some “bubbly” years.

This might be good news for those looking to buy a home who were previously priced out of the market. More moderate gains and realistic listing prices could draw some fence sitters back in.

Read more: What’s my outlook on the real estate market?

previousWhat’s Your Outlook on the Real Estate Market?
nextWhy Your Mortgage Lender Asks for More Than Is Required