Should We Worry About a Triple Dip in Home Prices?

The weather is finally beginning to cool off and Halloween is just around the corner. Oh, and The Walking Dead is back on TV. It must be fall.

Surely that means homes sales are going to slow down after the traditionally busier spring and summer sessions have now come to a close.

But aside from fewer transactions, there’s now talk (fear) about lower home prices as well, and even mention of a “triple dip” in home prices.

Will Home Prices Dip for a Third Time? 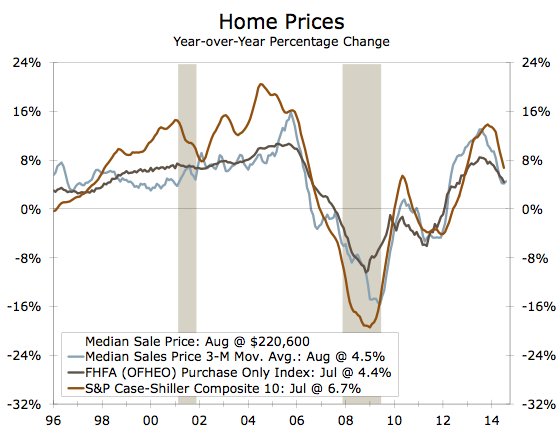 Lately, the stock market has been taking a beating thanks to weak global growth prospects and a number of geopolitical issues. In fact, the Dow recently turned negative for the year.

Does that mean home prices are going to follow a similar path? Are all those months of massive appreciation going to catch up to us?

I think everyone remembers home prices peaking around 2006 before taking a major dive. What followed was the worst housing crisis in recent memory. Foreclosures, short sales, loan mods, etc.

Then policymakers worked to buoy the housing market through a variety of efforts, including the popular first-time home buyer tax credit.

So now that home prices are hitting new record highs in many states (10 in August per CoreLogic) and the Fed is planning to halt its purchases of mortgage-backed securities, are we slated for a third decline?

After all, if home prices are no longer cheap and mortgage rates aren’t that low (they still are for now), the incentive to buy might not be very strong.

The latest release from the S&P/Case-Shiller Home Price Indices revealed that home price appreciation had declined markedly in July.

Nationally, home prices were up just 0.5% from June to July, compared to 0.9% from May to June. And none of the cities in the 20-City Composite saw home price gains improve on a year-over-year basis.

In San Francisco, home prices fell 0.4% from June to July, the largest decline since February 2012. Many suspect it could be in bubble territory right now, though others refer to it as an affordability crisis.

So the issue at the moment is decelerating home price gains, not falling home prices. The trend is expected to continue and some fear the housing market could weaken to the point where prices eventually go negative again.

Real Estate Not a ‘Screaming Bargain’

A commentary released last week by Wells Fargo addressed the potential of a triple dip in housing, and the good news is that the economists are confident we can avoid one.

They noted that despite recent deceleration, home price gains remain solidly in positive territory on a year-over-year basis.

In other words, it would take something really significant to push us into negative territory again after the recent stellar gains we’ve already realized.

The economists attributed the slowing of home price gains to a shift in the composition of the market, with single-family investors exiting faster than traditional and first-time home buyers are arriving.

However, they point to a “lean” inventory of homes for sale, coupled with fewer delinquencies and improved credit availability (even if Bernanke can’t get a mortgage), so demand doesn’t necessarily need to be very strong to stay the course.

At the same time, they did add that the strong run of pricing power has come to an end, forcing builders to turn to incentives to sell new homes with affordability now under threat.

And they expect “much more modest” home price gains in 2015 and 2016, arguing that homes are no longer a “screaming bargain” today. By the way, the investors that have since left the market were the ones who drove prices up.

So be careful when buying a home today. Sure, the downside risk might not be what it was in 2006 or 2010, but the upside is also much more limited.

With many states already enjoying new record highs, you have to wonder if we haven’t reached a near-term peak in home prices.