Southern California home sales edged up 7.2 percent last month compared to May, and were 2.6 percent higher than a year earlier, DataQuick said today.

“The market was wildly out of kilter a year ago, now it’s just somewhat out of kilter. We’re still seeing lots of bargain hunting, and we’re not seeing much discretionary buying. The single-biggest issue is still mortgage financing. Rates may be at record lows, but that doesn’t mean much if the lender won’t qualify you,” said John Walsh, MDA DataQuick president, in a news release.

He added that home sales may have been boosted by the homebuyer tax credit, but the extent won’t be known for a few months until the dust settles.

Of course, the homebuyer tax credit was recently extended for buyers already in contract, so there should be a boost there as well. 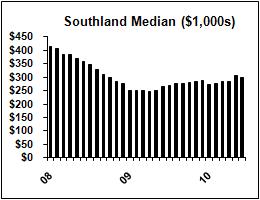 Foreclosure sales accounted for one-third of resales, down from 33.9 percent a month earlier and 45.3 percent a year ago – they peaked at 56.7 percent back in February 2009.

The company noted that high-end homes sales would be stronger if adjustable-rate mortgages and jumbo loans were more widely available.

Since 2000, ARMs accounted for roughly 44 percent of home purchase mortgages, but only 6.6 percent last month, up from 2.7 percent a year ago.

Before the mortgage crisis, jumbo lending accounted for 40 percent of home loan financing.