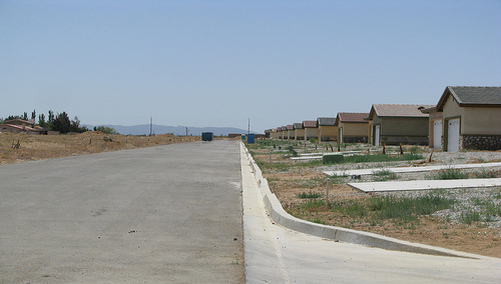 The Southern California median sales price slipped for the first time this year after holding steady for the first three months of 2009, DataQuick reported today.

However, most of today’s home sales involve discounted foreclosures, while very few high-end homes are selling, so the median’s decline has been exaggerated.

“In many markets we’ve seen signs you’d expect to see not long before prices would normally stabilize: robust investor and first-time-buyer activity, 10-plus months of year-over-year sales gains, and less price erosion, if any,” said John Walsh, MDA DataQuick president, in a release.

“The problem is that we still face two big threats to price stability: layoffs, which can cause foreclosures across the home price spectrum, and possibly a new round of foreclosures triggered by defaults on ‘option ARM’ and ‘stated income’ loans used in mid-to high-end markets.

A total of 20,514 new and resale houses and condo were sold last month in six Southland counties, up 5.2 percent from March and 31.4 percent from a year ago.

Foreclosure sales accounted for 53.6 percent of resales, the seventh consecutive month in which post-foreclosure properties made up more than half of resale activity.

Meanwhile, builders sold the lowest number of newly constructed homes last month for an April since at least 1988.

previousIs the FHA Scrapping Homebuyer Tax Credit for Down Payment?
next55 Percent of Americans Interested in Buying a Foreclosed Home