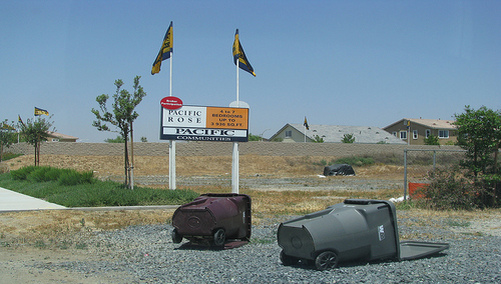 Some hard-hit neighborhoods in Southern California have seen home prices fall below 1989 levels, according to an article in the LA Times.

In 14 Southland Zip Codes, mostly desert communities on the outskirts of Los Angeles, median prices have fallen below levels recorded in April 1989, according to statistics from DataQuick.

In some parts of Palmdale, home prices are off 44.2 percent compared to 1989, and some spots in nearby Lancaster are down more than 35 percent.

But the median isn’t really a reflection of overall home prices, as most of the homes selling these days are at the lower end of the pricing spectrum, in foreclosure-ridden hotspots in the six-county area.

These areas also happen to be home to countless new housing developments, many of which are still being built despite being filled mostly with foreclosures and very few homeowners.

That’s the problem with areas on the fringe, where land is plentiful and obtaining building permits is relatively easy; who’s to say a builder doesn’t come in and attempt to build another 1,000 new homes next to yours?

Home prices closer to Los Angeles remain much higher than they appear, as a lack of space keeps supply in check, and new building permits aren’t so easy to acquire.

Of course, much of the unprecedented appreciation of the last few years has been wiped out, but things aren’t as bad as the median price implies.