Southern California home sales dropped to their lowest level in three years in October, according to DataQuick.

A total of 16,744 new and resale homes sold in six Southland counties last month, down 7.4 percent from September and 24.3 percent from a year ago.

“In addition to a lousy economy, the housing market still has a couple of nasty bottlenecks it has to contend with. First, sales of newly-built homes are at a low, mostly because builders can’t build at a low enough price to compete with the inventory of resale homes, many of which are short sales or foreclosures,” said John Walsh, MDA DataQuick president, in a statement.

“Also, lenders still haven’t opened the mortgage money spigot for buying move-up and prestige properties. These properties have come down in value by about half as much as entry-level homes. But trying to finance a higher-end purchase can be a real grind, even for well-qualified buyers with a 20 percent down payment,” he added.

Foreclosure resales accounted for 34.7 percent of resales, up from a revised 33.6 percent in September, but down from 40.4 percent a year ago.

FHA loans accounted for 35.8 percent of all purchase money mortgages, up from 34.8 percent in September, but down from 36.2 percent a year ago.

And fixed mortgages continue to dominate, as adjustable-rate mortgages were used for just 5.4 percent of purchases last month, down from 5.5 percent a month earlier, but up from 4.0 percent in October 2009.

Before the mortgage crisis, jumbo loans accounted for a whopping 40 percent of the market.

The typical monthly mortgage payment that Southland homebuyers committed themselves to paying was $1,111 last month, down from $1,177 last month and $1,196 a year ago.

Not good news for the flagging housing market…might be smart to wait out that purchase, even if mortgage rates do creep up some…

Southland Median Home Sales Price Over the Past Five Years 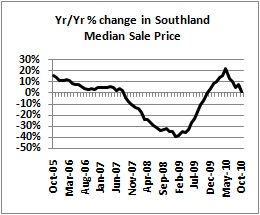