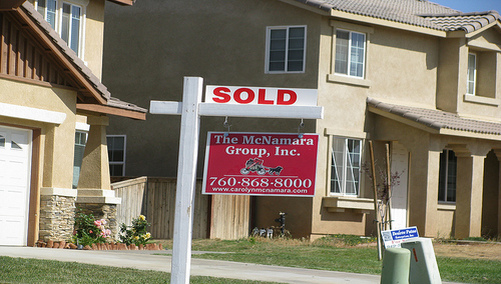 The median home price paid for all new and resale homes and condos in the six-county Southland was $249,000 last month, up 0.8 percent from April, but still 32.7 percent below the $370,000 median seen a year ago, according to DataQuick.

Keep in mind that the median was the second-lowest for any month since February 2002 when it stood at $242,000, so we’re not out of the woods yet.

“We appear to be in the early stages of the market gradually tilting back toward a more normal balance of sales across the home price spectrum,” said John Walsh, MDA DataQuick president, in a release.

“As more sellers get realistic, more buyers get off the fence and more lenders offer reasonable terms for high-end purchase financing, we’ll see a more normal share of sales in the more established, higher-cost areas that have been nearly comatose.”

A total of 20,775 properties closed escrow in the counties of San Diego, Orange, Los Angeles, Ventura, Riverside and San Bernardino last month, a 1.3 percent rise from April and 22.8 percent higher than May 2008.

Foreclosure sales accounted for 50.2 percent of all Southland resales, down from 53.5 percent in April and 56.7 percent a year ago.

Meanwhile, homes sales priced above $500,000 rose from 15.2 percent of sales in April to 17 percent in May, pushing the median higher, but it’s not all good.

“Let’s not forget we’re into the traditional home buying season right now,” he continued, “meaning more people are purchasing for all of the normal reasons, such as a new job or to get settled before school starts. Many are concerned with finding the right home in the right area, not just the most deeply discounted home.”