There’s been a lot of doom and gloom lately, with some housing pundits claiming we’re on the brink of another crisis and others fretting over collapsing home prices. Of course, many of these forecasts are self-serving.

And while this type of chatter will always persist, especially after chalking massive home price gains, recent data might be indicating the exact opposite scenario.

This week, Redfin reiterated that 2015 is on pace to be one of the “biggest years in housing” since the recent bust took place back in 2007-2008.

The real estate brokerage noted that Redfin customers requesting tours increased 50% in February from a year earlier. And signed offers were up 27% from year ago levels.

Redfin did admit to seeing this type of demand before, but the increase over the past two months has apparently been “record-breaking.”

That’s clearly good news for real estate agents, but what about home buyers and sellers? 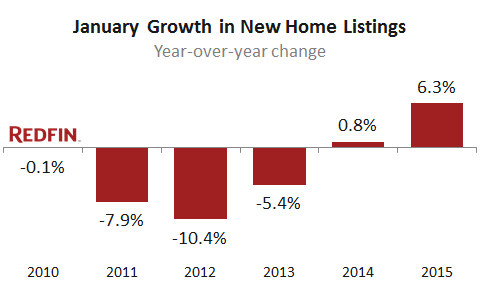 It could be that 2015 is finally the year when people get moving again, or investors begin to unload. Or both.

Per Redfin, new home listings were up 6.3% in January compared to a year earlier. While that might not seem like much, it’s much higher than comparable 12-month periods.

Inventory was barely higher in January 2014 compared to a year earlier, and negative for four years in a row in earlier January-to-January periods.

So there are clearly more homes coming to market in 2015, and we’re just getting started.

Tour request are also en fuego, running at a rate of nearly 50% higher than year-ago levels. So the demand is certainly there as well.

The downside to all of this is that year-over-year home price gains have come down quite a bit. They were only up 3.5% year-over-year in January, and are estimated to rise just 3.5% in February from a year prior.

Clearly we can’t sustain double-digit gains year after year, so this is expected. And with more homes flooding the market, supply should put some downward pressure on prices.

Homes Prices Up 5.7% In January 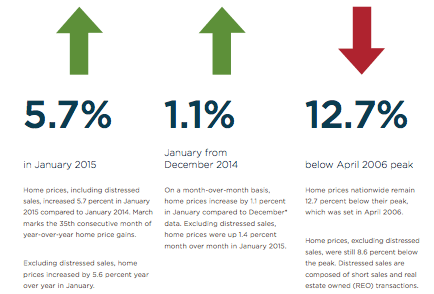 This week, CoreLogic reported that home prices were up 5.7% in January from a year earlier.

On a month-over-month basis, prices increased 1.1% from December 2014, and if you exclude distressed sales, the number was 1.4%.

As it stands, home prices are now just 12.7% below their April 2006 peak, or just 8.6% below peak levels if you remove distressed sales from the mix.

If it sounds like we’re getting dangerously close to bubble levels again, consider home prices in real terms, adjusted for inflation. Then prices aren’t quite as frothy as they look.

In fact, CoreLogic expects home prices to rise another 4.9% from January 2015 to January 2016, so the party isn’t over just yet.

And it really depends on the market you’re buying in. Some markets continue to be red hot in terms of demand, with supply still very limited for the usual reasons (limited equity, trapped in their homes by the low rates, etc.).

In the Los Angeles area, I’m seeing new highs whenever I personally browse listings. I was actually shocked at what I saw recently.

I expected home prices to moderate or flatten out this year after a somewhat lackluster 2014, but now I’m seeing listings at new all-time highs, even higher than the prior bubble.

And with more flexible financing options now available, like 97% LTV via Fannie and Freddie and reduced premiums via the FHA, I expect more borrowers to seek out and qualify for mortgages in 2015, especially with consumer confidence on the rise.

Don’t forget the boomerang buyers either, who were foreclosed on or sold short several years ago and now want back in.

This is especially good news for mortgage lenders as refinance opportunities are certainly continuing to dwindle as mortgage rates rise again and fewer stand to benefit.

The takeaway seems to be that real estate is still regarded as very attractive, and a lot of folks haven’t even gotten around to searching for a home for whatever reason.

I also think we tend to forget that downturns last longer than expected, and so too do upswings.

1 thought on “Surprise: 2015 Might Be a Stellar Year for Housing”