The Housing Market Is Nuts, But Probably Has a Lot More Upside

Whether you’re an existing homeowner, or a desperately prospective one, you probably already know that the housing market is absolutely bonkers.

The topics du jour are bidding wars, skyrocketing home prices, expensive lumber, and a lack of homes for sale.

And it doesn’t seem to be getting any better for those who wish to buy – instead, it appears home prices are actually accelerating.

Meanwhile, those who already own a home might have told themselves that they’d sell if asking prices reached some absurd number, but now that they’ve arrived there, they could be making adjustments.

The other issue is those who probably do want to sell have nowhere to go. Sure, they can make a boatload of cash if they sell right now, but then what? Live in an RV?

This is the catch-22 the real estate world is currently experiencing.

The other day, Redfin CEO Glenn Kelman pointed out on Twitter that “there are now more Realtors than listings.”

This is bad news for both home buyers and, well, real estate agents. Even though it’s probably “easy” to sell a home right now if you’re a listing agent due to the red-hot demand, the volume might not be cutting it.

So you get one sale here and there that results in a bidding war, but can you get another listing?

There are also all the fintech-powered iBuyers to deal with too…which might be cutting into these individual’s potential listings.

And homes are selling for 1.7% higher than list on average, which is yet another record and sign of just how wild this housing market has become.

A recent Redfin survey also found that 63% of prospective home buyers reported bidding on a home sight-unseen, while one buyer offered to name their first-born child after the seller.

This buyer didn’t win the home…

You might be wondering what the heck is going on? Well, it doesn’t take a real estate scientist to put it all together.

Simply put, there are few homes for sale, too many would-be buyers, and long-term financing (the 30-year fixed mortgage) is on sale.

Combine all that and you have what we’ve been experiencing for years now, a trend that only seems to be accelerating of late.

When Do We Worry About Another Housing Bubble? 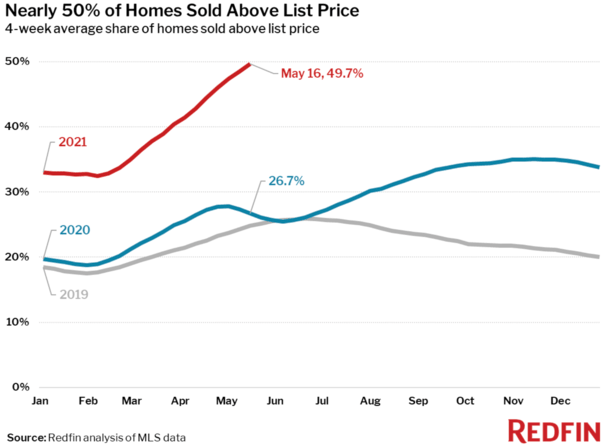 Now we all know why the housing market is so hot, but the next logical question is when will it all come crashing down?

After all, when something experiences a meteoric rise, it’s often not long before it experiences a correction, and perhaps freefall moment.

Just look at cryptocurrencies like Bitcoin, which have experienced wild swings over the past year.

The difference here is real estate provides shelter, a real utility, while these other things are merely investments. You can’t live in a bitcoin, yet…

So where does the real estate market go from here? Well, it might sound crazy, but it could have several more winning years ahead.

For a long time now, I’ve circled the year 2024 as the date the housing market could peak and/or begin to start falling after a decade-plus bull run.

That would still give us another 2-3 years or longer from current levels, meaning even those who buy a home today could stand to see some big gains.

Why Things Are Different This Time Around

While it’s easy to compare today’s housing market to the one seen in the early 2000s, just based on the feverish mindset and rapidly rising prices, it’s really not the same.

This isn’t to say it can’t become that again over time, but at this moment, it’s not.

Back then, the financing piece of the equation was a complete circus. Nearly every home loan submitted to a lender was underwritten using stated income.

Today, this isn’t the reality – while there are low and no-down payment loans in existence, most borrowers are putting down something, and many are being forced to put down 20% or more just to win a bidding war.

Additionally, mortgages are fully-underwritten, with income, assets, and credit scores all considered before an approval is granted.

On top of that, the overwhelming majority of homeowners are choosing a 30-year fixed mortgage, as opposed to say an option ARM or even a hybrid ARM like the 5/1 or 7/1.

Now if and when that begins to change, and homeowners start overleveraging again, then you’ve got a problem, especially if home builders finally catch up on the demand side.

That’s kind of how I envision another housing downturn – when financing gets out of whack at the exact time there are too many high-priced homes for sale again.