The Pros and Cons of Trump’s FHA Premium Cut Freeze

You’ve heard the news. President Trump announced a freeze on the expected 25-basis point FHA premium cut just a week or so after it was announced.

For most folks, it was an unexpected and sad ending to a seemingly positive announcement that would have saved the average FHA home buyer about $500 annually.

That money would have ostensibly gone back into the economy, either through home improvement or general spending. It would have also made FHA mortgages more affordable and perhaps a stronger alternative to conventional financing.

Instead, the premium cut has been put on ice, likely in an effort to reduce the government’s footprint in the mortgage industry.

It should be noted that it’s not necessarily dead in the water, meaning the discussion is ongoing.

Two major players have already weighed in on the move, so let’s look at the potential pros and cons of Trump’s action.

The Pros of an FHA Premium Cut 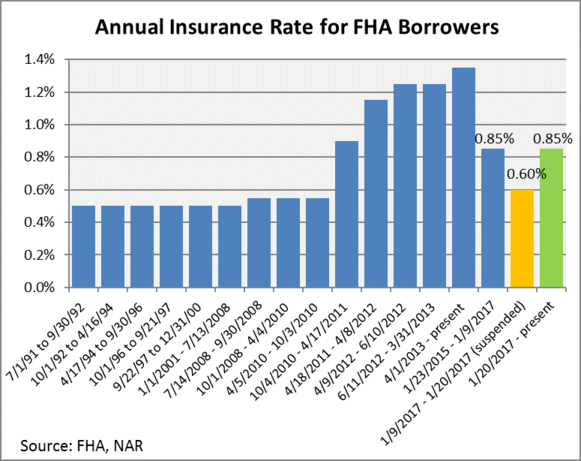 It seemed most in the industry were in favor of a premium cut, including the all-powerful National Association of Realtors, which tends to be a fan of lower home buying costs.

The National Association of Home Builders (NAHB) also indicated that it supported the proposed rate cut, saying it would “reduce the cost of housing for creditworthy borrowers, particularly for first-time home buyers.”

And a poll conducted by Inside Mortgage Finance discovered that just 14% of the respondents were against an FHA premium cut.

After HUD announced on January 20th that the FHA premium rate cut was “suspended indefinitely,” NAR President William E. Brown released a statement noting that “roughly 750,000 to 850,000 homebuyers will face higher costs, and 30,000 to 40,000 new homebuyers will be left on the sidelines.”

So, there’s your first pro…if the cut is unfrozen, which it could be, eventually, nearly one million home buyers will face lower costs thanks to cheaper FHA insurance premiums.

Additionally, and perhaps more importantly, as many as 40,000 home buyers won’t miss out on homeownership if the rate cut actually happens.

NAR also estimated that the average buyer of a home with an FHA loan would save $500 per year in insurance costs. That’s another pro, assuming it happens.

The Cons of an FHA Premium Cut

Then there’s the other side of the coin, which is presented by Edward J. Pinto, a man who has been an outspoken critic of the FHA for a long, long time. He’s also one of two men behind the Wealth Building Home Loan (WBHL).

Pinto once referred to the FHA as a predatory lender, though for some reason that article can no longer be found on the American Enterprise Institute (AEI) website where he is a resident fellow.

In response to the FHA cut suspension, he said the move was “actually good news for first-time buyers,” as his research apparently shows such a cut would just increase demand when inventory is already dismal.

The basic premise makes sense – cheaper borrowing costs might equate to more buyer demand, which could actually increase home prices and offset any financial gain related to the MIP cut.

And one could argue that the last thing the housing market needs is more demand. Quite frankly, it needs more supply (housing inventory), and fast, so prospective home buyers can actually find a suitable property to purchase, FHA financing or not.

Most importantly, starter homes are in short supply, and without them the housing market can’t maintain its rapid ascent.

Lower premiums also mean less will go into the FHA’s coffers, meaning fewer dollars will be set aside for loan losses in the event of another housing crisis.

In summary, a MIP cut could actually have the unintended consequence of raising homeownership costs via increased asking prices. That would be accompanied by higher down payments, an issue that continues to be more of a hurdle than monthly mortgage payments.

Still, the policy reversal will undoubtedly come as a big blow to the many seeking to purchase their first home, especially those already in contract who will find out their payment won’t be as low as they expected.

That could lead to some fallout in the short term.

Reverse Mortgages to Blame for Lack of a Premium Cut?

Update: It turns out an FHA premium cut would have pushed the agency’s Mutual Mortgage Insurance (MMI) Fund Capital Ratio to 1.76%, which is below the statutory minimum.

It would have led to a $3.2 billion reduction in cash flow and a $45 billion increase in the FHA’s cumulative Insurance-in-Force (IIF).

As such, I wouldn’t expect the FHA to cut premiums anytime soon.

Funnily enough, it is reverse mortgages, also known as Home Equity Conversion Mortgages (HECMs) that are the problem, not traditional forward mortgages.

Apparently the FHA’s forward mortgages had a positive economic net worth of $38.4 billion in fiscal year 2017, contributing $4.2 billion to the Fund.

Meanwhile, the 2017 HECM portfolio had a negative economic net worth of $14.5 billion.

previousWould You Rather Have a Low Mortgage Rate or Pay a Lower Price for a Home?
nextBlack Knight Is Working on Its Own Mortgage Credit Score